In the space of twenty four hours, the weather forecast went from passable to far from it.  Snowflakes appeared next to the blue drops under the grey clouds, and the predicted temperature dropped yet further.  But what’s a forecast, right?  An educated guess?  It wouldn’t be the first time a forecast had been wrong, right?  Wrong.  As in it wasn’t wrong, it was right.  At 6:30 this morning, as Martyn loaded my bike on to the rack on the back of his Toyota Picnic, it was already cold and damp and altogether not attractive.  And incidentally, what kind of name is that for a car?

My sportive packing is back on track, and pre-pickup faffing was all sorted well in time this morning. Last night I discovered that my brand new shiny clean Topeak rear light was missing – who knows how, where, or when – which was irritating but not a problem.  Or so you’d have thought.  As we got closer to Longleat and the clouds came further down and the rain became heavy snow, I started to rue its loss a little more keenly.  Braving the blizzard, we joined a steady stream of equally insane riders heading in the same direction. Quite a few of my mates were doing the ride, and a regular volley of text messages and phone calls ensued.  The first piece of good news to come our way was the cancellation of the 100 mile route…which came as a bit of a relief considering the conditions.  The idea of 100km rather than 100 miles was infinitely preferable, and I felt a spark of hope that it might actually be doable. I perked up a little. I also decided that, on the basis that the ride was now going to be shorter, it might be a good time to see if riding on tramadol was something I could do, so I opted for those instead of the paracetamol.  I remember the days when I thought heavy dosage ibuprofen was a bit much…*sigh* ;). 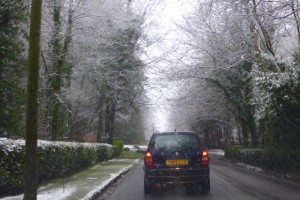 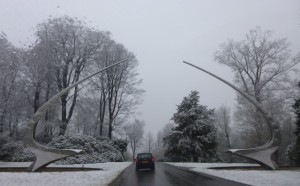 We pulled into the estate, well before the 8:00am cut off time, and joined a long and winding queue that was backed up all the way from the parking by the main house to the entrance.  Tedious.  The snow carried on coming down, covering cars, roads, everything.  The side roads looked worryingly coated, and there was a lot of both mental and verbal debate going on. Let’s face it, if I wasn’t reviewing it, this was the kind of day when you just don’t bother! 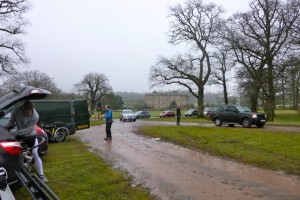 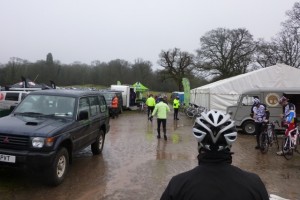 Finally, and it did take quite some time, we were marshalled onto a parking field, which was already a quagmire, and ensured that we had wet feet practically the instant we got out of the car.  First things first, and it was off to the toilets and, I am happy to report, there were plenty of them this year, with minimal queuing, and though I can’t speak for all of them, mine was still suitably equipped and relatively sanitary!  Having been sent out our rider numbers and helmet tags in advance there was no need for registration, which is always nice, and removes one element of queuing from the equation.  Back to the car, and minimal faffing.  Well, who wants to stand around getting cold?  Besides which, the layers question was simple..all of them!  To be fair, it wasn’t totally freezing, possibly due to the lack of wind, but I still put everything on as wet and cold is a whole new ballgame.  Gradually a little peloton massed by the orange coffee tents.  Myself, Martyn, GB, Mark and his friends, and Steve…  There was not a lot of PMA going on, and quite a lot of doom and gloom, as we joined the long queue for the start. A very impressive array of waterproof luminousity was broken up by the occasional insanity of men in shorts.  Shorts!  I mean, really, what planet are you guys on? Is it big and/or clever? Methinks not… 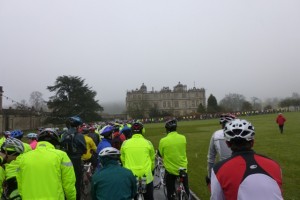 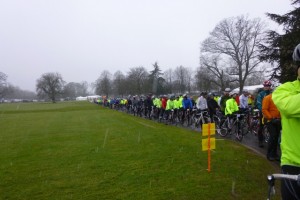 We shuffled forward in fits and starts to our rider briefing. Though the snow continued, I gather only 20% of registered riders didn’t make it over the start line, which is fairly astounding, and possibly due to the late change in the forecast. If you’re already on your way somewhere, you’re less likely to bail?  Anyway, “be careful, it’s not a race, don’t do 100 miles, and off you go”….so off we went.  Cautiously and carefully, since setting off in a bunch is bad enough in good weather, and worse when the roads are wet, slippery, and about to be uphill. 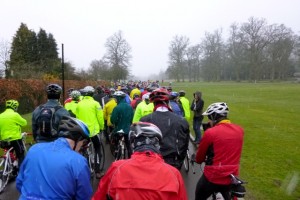 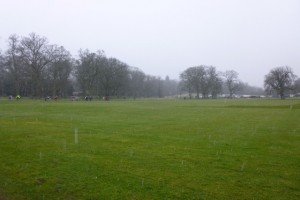 The snow got heavier.  As we wiggled our way around the estate, climbing gradually, the white stuff hitting my face actually hurt!  Not the kind of exfoliation us girls usually go for.  Going up the long main drive, a climb that always seems a little brutal for the start of a sportive, but is better if you’re expecting it, the snow got heavy enough that the hyperspace effect cut in…  In its favour, the climb is long enough that my crawler gear engages and I felt relatively happy pootling my way out of the bowl where Longleat House sits, chatting intermittently to Mark as we went.  I wasn’t too cold, unlike those poor photographers sat immortalising our misery, and I was feeling ok…but…man, the conditions.  The roads were getting even slushier, the snow was making visiblity tricky, my glasses were misting up, and a stream of riders were turning around and heading back past us in the opposite direction to the start.  We were two down before we even started the climb, and at the top the remaining five of us regrouped and mulled things over.  We decided to head to the end of the estate road and see what we could see…which was snow, snow, and more snow, and many more riders heading back towards us with reports of how grim it was out there.

Sod that for a game of monkeys.  Discretion is the better part of valour.  Live to fight another day.  Etc. We all have big seasons ahead, things we want to be doing, and quite a lot of experience amongst us and, as GB put it, he prefers his collar bone in one piece.  We collectively turned tail and headed back whence we had come, picking our way gingerly down the wet hill and ascending riders, to bring us back to the start.

As Mark and I passed a couple of riders mulling their future over, they were heard to say, look at those guys, they’re pro riders, and if they’re heading back, so should we.  Very funny *grin*.  There were a whole range of excuses/reasons for bailing going on, but essentially it wasn’t the cold or the wet that stopped us, those we can cope with.  It was just too dangerous.  Maybe it would have brightened up (it did eventually, typically it’s sunny now), maybe it would have been clearer further out (we’ll never know), but the roads were going to be wet, mucky, and slippery for quite some time to come, and it just didn’t seem worth it. Nothing to prove, after all. 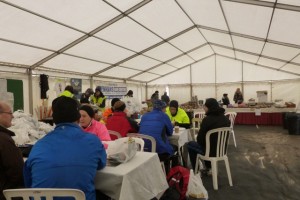 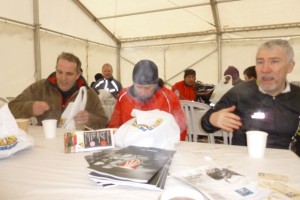 We re-racked the bikes and gathered at the start village.  Rather than a free coffee, I opted for paying for a more than worth it, because they make the best americanos out there, coffee from Claud the Butler, which was as fab as ever.  We collected our goody bags and took a pew inside the sodden marquee, where the floor under the matting was so boggy it was like walking on a bouncy castle.  This year’s Lionheart scarf tube is particularly fine as it’s in shades of blue and thus perfectly matches all my kit and both bikes – result!  Can’t knock the voucher for a free bottle of wine either :). It was a bit early in the day for free hotpot, even were I able to eat it, but that didn’t stop GB.  I had a chat with Emma, one of the organising team, who was obviously a bit disappointed that 8 months of hard work should have come to this, but you can’t factor in blizzards in March, now can you?  Other than the odd queue, which may have been weather related, everything else had, from a rider point of view, gone swimmingly.  Almost literally ;).  It’s been a great event for the last couple of years, and hopefully next year it’ll be dry and sunny! *fingers crossed*.  At least we tried, right?  Plus I proved that I can ride on tramadol, although it might take more than 10km to properly test that theory!  I hope those that braved it had a good one, and kept it rubber side down :). 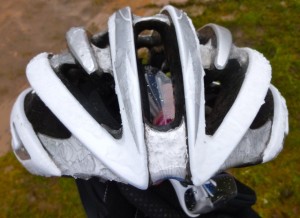 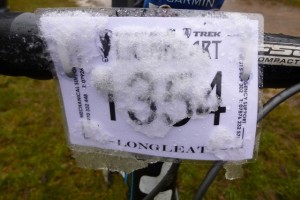