As sportives go, the Mad March Hare is not what you’d call a difficult sportive.  But, and yes there’s a but, a large but, and not just my large butt, when that sportive is the first one of the season, when the longest ride you’ve done so far is c.50 miles, any sportive is a challenge!  Today was no exception…

The Mad March Hare has become my traditional way to start the sportive season.  Looking back I see that this year was the fifth time I’ve done it, which I think is as long as it’s been running.  It’s just as well they vary the route every year then, isn’t it?  Variety is the spice of life…and I have a low boredom threshold ;).

You could tell it was the first event of the season by the amount of faffing that preceded it.  That and the fact that I forgot things, like my bar bag, because I’d totally forgotten that I use one, and was only to remember when I missed it later trying to eat en route when getting things out of back pockets under layers in full finger gloves proved to be a challenge!  D’oh!  By the time I’m back into the swing of things, leaving the house will be a breeze (tail wind of course) and I will have gotten the art of pre-sportive packing down to a fine art.  I’m not the only one, Sean forgot his waterproof and his Buff, though I think Mark showed us both up by being totally sorted! 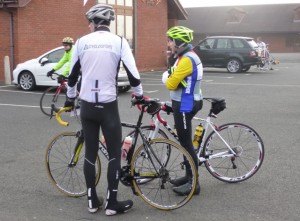 Yes, today I had company.  T’was due to be GB, but due to health issues, he sensibly remained at home in recuperative fashion.  So t’was Sean “Long Legs” Lacey, of Cyclosport fame, and “Retro Pixie” Mark.  I don’t have legs that go up to my armpits.  Sean does.  As in that’s how tall he is and about where his legs finish on me!  As for Mark, it’s a twitter plus kit fetish thing, plus it reminds me a bit of Rocket Dog (I’m a girl, it’s a shoe thing), and he’s fast too!  *gulp*.

Which, with repetition, hesitation, and deviation, finally brings us to a newly arranged car park near ride HQ, at 7:45am this morning.  I think I prefer the new parking actually; the original field was out of bounds due to the recent weather, but it wasn’t much fun last year even when it wasn’t.  There’s a lot to be said for hard standing and plenty of room, and it was only a brief ride to the start so as far as I’m concerned, it was an improvement!  I wonder if they’ll keep it for next year?

After yet more faffing under cold but ever lightening skies, I closed the boot, stuffed the car keys in one of my seemingly infinite range of pockets, and headed for the start, where a patient Sean and Mark were waiting.  There was a short queue for registration, which Sean kept me company in, and once I had my number and ties, there wasn’t much left to do other than the obligatory pre-ride toilet stop.  Man I hate bib shorts!  At least there was a female only cubicle and enough portable loos (6 or so?) to ensure that there wasn’t much queueing. 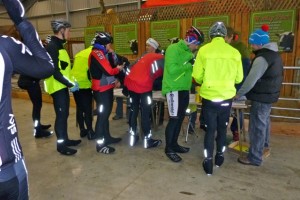 OK, done.  Time to stop all that faffing and start riding!  We joined the queue, and were duly recorded and sent away in batches.  And they’re off!… 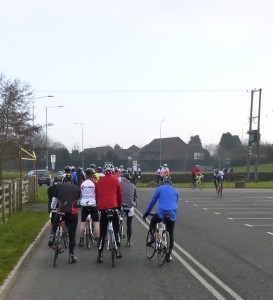 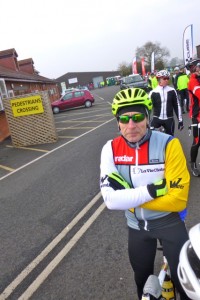 You can always tell my winter sportive reviews, they’re the ones with very few photos!  There’s just no taking pictures on the go when your camera is at least one layer down and you’re wearing gloves.  Stopping breaks up the momentum, and also means losing heat which is not good when it’s chilly.  And it was – proper cold!  So you’ll have to use your imagination to picture lots of quiet, mostly dry, occasionally icy Cotswold’s country lanes.  It’s not so much hilly as rolling.  Ish.  Which is to say that the ups feel rolling on the way out and, after the big hill of the day and the food stop, start to feel more and more like hills the closer you get to the end of the ride!  It suffers from being essentially downhill on the way out and the reverse on the way back which, as we all know, is entirely the wrong way ’round!

And the big hill in the middle?  Big indeed.  Deceptively so, as visually you could only see the brow of the bit you were doing, then you’d turn the corner and see it continue to go up, and up, and up…!  Heaven help those of you who were already walking on the first section…new cleats anyone?  I made it up, very slowly as ever, but in an odd way I quite enjoyed it.  At least with long hills I can get into crawler gear, get some kind of rhythm, and just get on with it :). 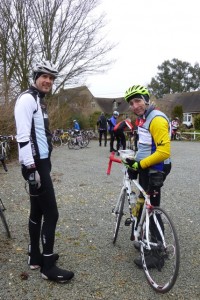 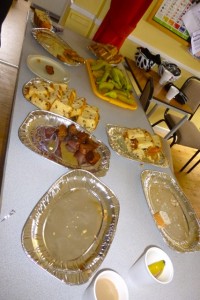 The food stop came at a village hall after that big hill, and also satisfyingly more than half way around, meaning that it was all downhill from there on in.  Well, ok it wasn’t, but mentally I’m always happier after the halfway mark!  There was a huge array of food on offer, tables of the stuff, being descended upon by cycling gannets.  I had half a cup of much needed coffee and a toilet stop…queuing was the only option for us girls, though a lot of less patient gentleman were taking to the greenery outside instead, which I doubt went down that well with the locals.

Once more unto the breach my friends…who were impressively still with me!  Bless ’em :).  We had a bit of a blast for a while, there being some fun flats and downs to be enjoyed, and you know how much I like those.  As I always say, I have to do what I can to make up for what I can’t!  On a slightly negative side rather too many of today’s otherwise enjoyable descents ended at a junction of some sort, frequently with a main road to be crossed or negotiated, which took the wind out of one’s gravity filled sails somewhat.  At least the signage was pretty good, possibly with one exception near the end, so I didn’t get lost.  Not that my Garmin would have let such a thing happen anyway – the gpx file was pretty good :). 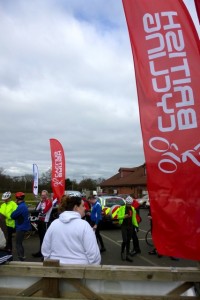 After a while, as the miles mounted up, and those ups continued, I was gradually left to my own devices, which was, to be fair, probably a good thing.  Paracetamol can only do so much, and by the mid point of today’s ride, even though I took the next dose, it was failing to do even that, so it was a case of doing the best I could and muddling through.  Which I did, and which went ok, though I am glad the route wasn’t any longer.  This is not to say that I was too far behind, as apparently the guys only got in 5 minutes before me.  (See those pink things in the sky?  Flying pigs…  Maybe that’s where the free bacon rolls come from? ;)).  Either way, I was very happy to roll back into HQ and call the first sportive of the year done :). 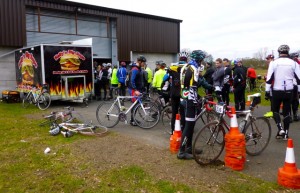 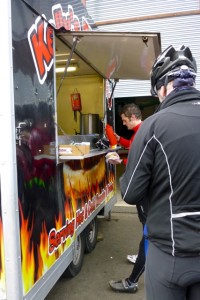 So, things I have learnt/relearnt today.

Still, considering that I was reckoning on a five hour ride, I think it went pretty well.  Better than I was half expecting, and faster than the last few years too.  I also enjoyed the very tolerant company.  This all makes for a pretty positive start to the season.  I’ve been quietly fretting about how I’d be out there, what with my issues, lack of training, and so forth.  Let’s face it, it has all become a little more challenging than it used to be.  I’m very tempted to throw an “it’s not fair!” tantrum, but I’m too tired…I got home, had a bath and a glass of white wine and went to bed for an hour…talk about a lightweight! *grin*.

UPDATE: official Cyclosport review is now up here.  Photos are here if you feel like searching MMH for 0523 ;).  Official times went up today too here: – my time is 5:01 – amazingly only 5-7 minutes behind the lads!!!