Today is Day 5 on the wagon(s).  New Year, new resolve, etc…  I’ve had a week when riding wasn’t an option, as working wasn’t optional, and the rest of my time was taken up by seeing the kind of people with whom you make appointments and don’t cancel them.  So no riding, just evening gym sessions.  Better than nowt, plus it’s also a lot easier to decide you’ve had enough and it’s time to go home when all that involves is getting in the car and driving home, rather than finding yourself riding somewhere out in the wilds when the urge to cease such activity hits.  It’s also a good way to start getting the fitness back, and strengthening the core muscles again.  A good call all ’round therefore, and probably the choice I’d have made even if I’d had a choice to make ;).

Earlier this week it turned out that GB would be free on Sunday.  As would I be, clearly, otherwise I wouldn’t be writing this and you wouldn’t be reading it.  In impromptu ACG, organised by the wonders of social media, style, we were four.  GB, myself, Martyn and Steve.  In consideration of my weakened and pitiable state, GB agreed that he would go against his natural inclination towards more interesting rides, and that we could do the traditional coffee run to Glastonbury and back.  Ideal for me, because it’s pretty flat on the way out, thus allowing me to establish how I was doing before having to decide on how I was getting home.  Hills?  Straight home?  Taxi? ;).

A 9:30am start was most civilised.  Although given the grey cloud and the fog, there wasn’t as much daylight as you might have hoped for.  Still, it was dry, and mild, and there wasn’t a lot of wind, so you’ll not hear me complaining.  Once all four riders of the apocalypse were assembled, we were off.  A little nervously on my behalf, but faint heart never won anything, right?  The one advantage of being off form is that it doesn’t take me as long to warm up as it does when I’m on form.  How weird is that?  Bonus though as it means that horrible first chunk of the ride when you feel terrible doesn’t last as long.  Of course the fact that I’ve been on the wagon for a while probably doesn’t do any harm either…!

Coffee was at Heaphy’s café, for two reasons.  Firstly the very good coffee, secondly the ability to park the bikes outside but close by and in plain view.  Not that we’re paranoid or anything.  Oh, and if you’re me, the fact that they also have Orangina is both a third reason and the icing on the cake.  Well, icing on the coffee maybe, since they don’t do gluten free cake.  I miss their carrot cake *sigh*.  They very helpfully told me about all the other places in town where I could get very good gluten free cake.  Helpful?  Not really.  Not when I’m standing in your café and ordering coffee from you.  Would you like me to go somewhere else?  An interesting marketing tactic methinks… 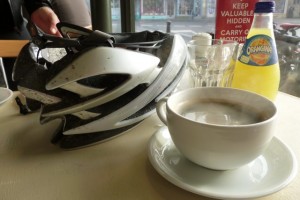 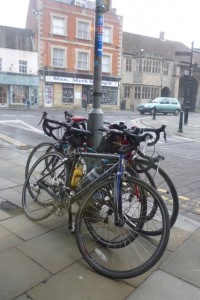 Time for the rogues’ gallery…  Well there was a great deal of discussion about music that I am sadly too young to properly appreciate, so being merely a child, I amused myself by playing with my toys ;).  I also discovered that t’other half had sent me an email jokingly asking if I’d like to ride this, which made me grin quietly to myself – maybe next year? 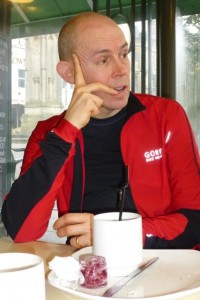 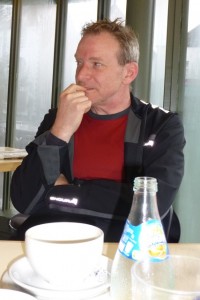 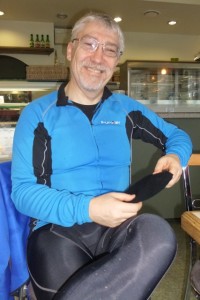 It having been pretty mild on the way out, I took the opportunity to swop things around and put on mitts for the return journey – all the better to take your photos with ;).  We did in fact take a longer and more circuitous, if not hilly, route home, since we all felt up to it.  Or I did, so I didn’t put my usual spanner in the works ;).  I was pleasantly surprised with how well it went really,  I’ve definitely felt worse out there! 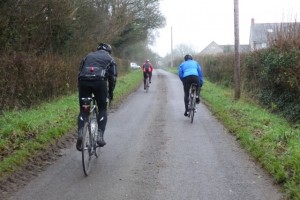 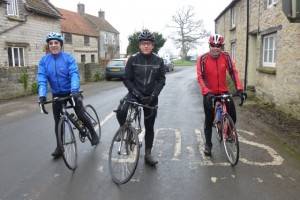 I won’t go pretending that I was leading the way, but I’m not going to apologise for just doing my best.  It’s another part of my resolve – no apologies, no excuses.  They’re counter productive, and I’m working on my PMA :).  The weird thing is that I’ve been below par for so long that I seem to have forgotten that even on good days, back in the day, I could still have trouble keeping up with these guys, and would get dropped on the hills.  So I possibly need to readjust my baseline, because actually, looking at the stats and the route, this was a pretty good ride.  OK there was less talking on my behalf than sometimes, what with the whole need to breathe thing, but I think that’s fair enough *grin*.  Possibly also a blessing for my fellow riders too ;).

Here’s a sign that things are getting, maybe, just maybe, back to whatever normal is… ;). 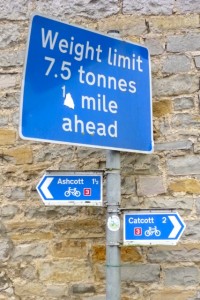 So 2013 is under way, and off to a fairly good start.  Five days, 3 gym sessions, one good ride.  Result.  *touch wood*. *fingers crossed*. *salute solitary magpies*.  There are many miles ahead, many rides, many sportives (hopefully – Cyclosport haven’t sorted the calendar yet, which if you’re as organised as me is a little frustrating!).  If this year is anything like previous years, this will be burned on the back of my retina soon enough: ;). 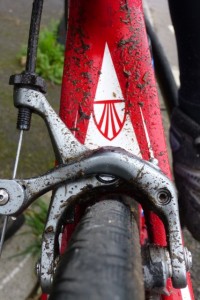