I have a bit of a thing about cycling over the old Severn Crossing.  I like it.  A lot.  And it’s a fair bet that a sportive called the “Severn Bridge Sportive” involves that, right?  Bit of a no-brainer really.  I also have a tendency to repeat sportives that I’ve enjoyed before.  This one I did in 2013.  In June.  In glorious sunshine.  This year’s edition was in August.  On the Bank Holiday weekend.  So guessing what the weather was going to be like was also a bit of a no-brainer…

Yep, I love waking up in the dark, after a truly disastrous night’s sleep, to the sound of rain on the conservatory roof, and the forecast of much more to come *sigh*.  I came this close to rolling over and going back to sleep, but since I was due to be reviewing it my sense of obligation and my conscience kicked me up and out of bed.  Man, I have to learn to get rid of those two pesky things! 😉

Which brings us, after a damp and dreary drive, to HQ at Castle Coombe Circuit.  I was on the early side and was marshalled to park up at the nearer end of the parking, passing many walking riders heading off to register in the chilly rain.  I wasn’t going to do that.  I knew better.  I knew that it’s further than you think.  And I figured the best thing was to sit in the back of my car, faff, get sorted, and kill time so that I could ride to registration, use the facilities, and then not have to loiter around in the rain for too long before start time came.  Moisture minimisation.  So there I sat, peering out, watching riders walking to and fro’ while it rained, and rained, rained heavier, rained lighter, but always rained.  Ah well, at least it was easy to decide on layers.  S*d the gilet, it was definitely an armwarmers and waterproof day. Let’s face it, with the autumnal temperatures, boil-in-bag wasn’t likely to be an issue.  Hey, on the upside, at least it wasn’t windy for a change! 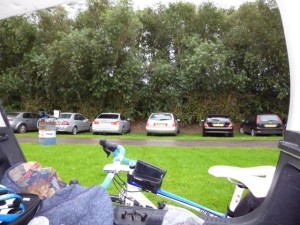 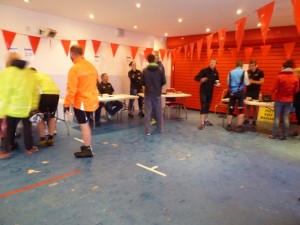 Time passed, and finally it was time.  I clambered out the back of the car, clambered on to the bike, and rode off to register.  Luckily registration was indoors.  Riders were sheltering wherever dry was, and there may even have been an element of huddling together for warmth!  I signed in, got my number (322), ties, and helmet timing chip, and went back into the ‘orrible outdoors to fix them where they needed to be.  Whilst waiting outside I bumped into Herbie and his Mrs, and we chatted for a while, friendly faces always being a good thing, before taking our places in the start line.  I think we were in the second group away, but a bit far back in it so I couldn’t really hear the briefing – maybe a mic would have been useful – but I caught the odd salient point and saw the signs I would be following, before we were on our way. 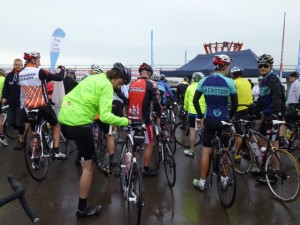 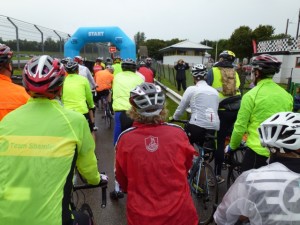 The route starts with half a lap of the race circuit which, though smooth and flat and therefore probably lovely normally, seems to have decided drainage is not necessary and that standing water is a good thing.  Water was coming down, coming up…and my ar*e was soaked even before we left the circuit.  Ick!  I’d meant to cycle with Herbie for a while but all that cold and wet going on meant I needed to get going on and warm up a bit so I left them behind and headed off.  As we exited the circuit onto a muddy country lane, one poor sod was already fixing a puncture.  I’m fairly sure that today, if that had happened to me, I’d just have walked back around the circuit, loaded the car up, and gone home!

Off we go then.  There’s a distinct lack of photos today, mostly due to the weather.  But also to the fact that we’ve all seen damp English country lanes before!  What scenery there was en-route to the bridge would probably have looked lovely on a different day but today it just all seemed a little grey and dismal and uneventful.  It’s amazing what a difference weather makes to a place, and when you’re busy looking down and watching where you’re riding, you’re not really looking at the view anyway.

Because today I did the short route.  I like Welsh hills.  I liked the long route when I did it before.  But today 40 miles of wet Welsh hills just didn’t appeal.  I can do them any time and, in fact, have already done that several times this year.  So I rode a fairly flat 33 miles just to ride over the bridge, grab some yummy apple pie, ride back over the bridge, and ride 33 miles back again.  Which made this a fairly easy, vaguely miserable, slightly boring ride.  I know, I’m weird, how can riding a bike be boring?  But without lots of up there isn’t lots of down.  It’s just fairly constant pushing, slowed down by puddles, potholes, and mud!  Maybe I should have done the extra forty mile hilly loop after all?! 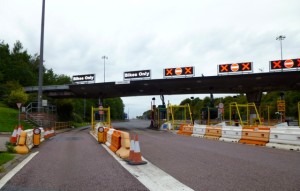 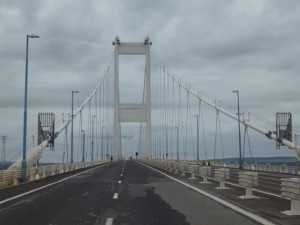 But, and there’s a big but, it was totally worth it.  Why?  Because thanks to coinciding with the Severn Bridge Half Marathon and presumably some hefty behind the scenes negotiating, the old Severn Bridge was closed.  Totally closed.  As in the only traffic to be crossing it between 7:00am and 13:00pm was us.  Cyclists.  How cool is that?!  Very, since you asked.  How many people can say they’ve done that?  Well, around 300 or so probably, depending how many no-shows there were, but still, bet you haven’t!  It totally made my day :D. 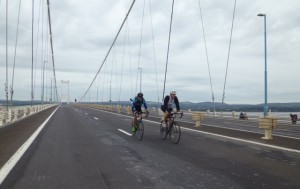 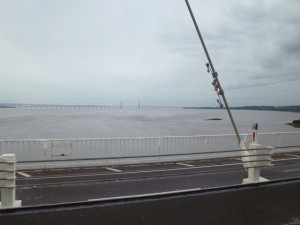 You can’t blame an event for the weather though.  This was not a bad event by any means, it just suffered from bad weather.  There were a lot of positives.  Good signage, all bar the odd bit when I’d been on my own for a while and was convinced I was lost and could have used a reminder.  The marshals and staff were friendly and helpful.  The food stop (used twice on the long route) was great, well supplied with hot drinks, savoury and sweet food (I mentioned the apple pie, right?), water and energy drink, and being in a community centre, it also had toilets. 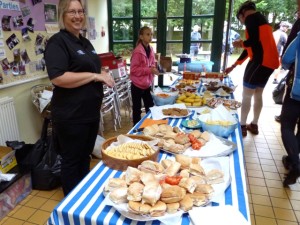 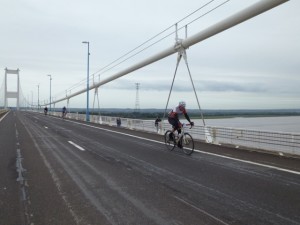 Mind you, the short route – being essentially out there and back again – involved a little too much repeating for my liking, and the section around what I think was Yate on the way back in the rain involved far too many roundabouts, traffic, and traffic lights to slow me down when I was in push for home mode.  And I did push.  After a drier hour around the bridge, on the way back the rain came back.  I’d had enough, and I wasn’t taking any prisoners – I was over-taking them all!  Well, it was pretty flat 😉  Which would make it a great route for people who don’t like hills, who aren’t race snakes, who fancy a nice day out in the countryside, or for novices.  The 100 mile route has more to challenge and more to see, and those hills in the middle would break up the flat out and back nicely.  Maybe next year? 🙂 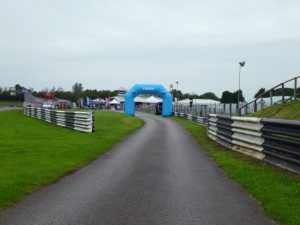 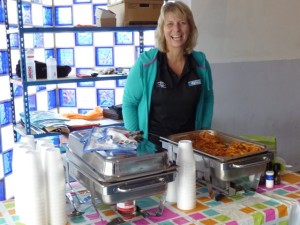 After 66 miles I was back on the soaking circuit again and sort of sprinting for the Finish arch, where I was soon collecting my goody bag, and then declining the free pasta.  That done, I had a chat to Andy Cook who runs the event and who seemed remarkably sanguine given the weather that had happened to his event and no doubt cast somewhat of a pall over the Family Cycling Day element of the day.  Still, it’s the English weather, what can you do?  There were still various undeterred small people cycling around the track with their parents and clearly having fun doing so 🙂 Chatting done, and since I was soaked through and getting cold, it was time to head back to the car, reverse the faffing process, and go home.  Back home, down the rainy motorway, with the heating on!   Bye bye summer… 🙁

By the way the day did have another highlight.  On the way back, as I closed in on another rider, and passed a farm on the left hand side, there frolicking on the drive, were two very cute small kittens.  One of which ran off, while the other sat and watched, all black and white and wide-eyed as I passed.  Aw, how adorable.  It definitely made me smile.  In fact, as I informed the somewhat bemused rider I was now passing, I think all sportives should include kittens 😉 *grin*. 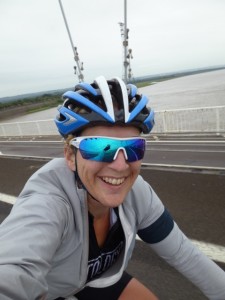 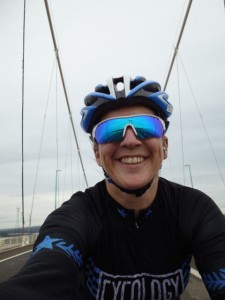