I spent all day yesterday doing as little as possible to try and make sure I could ride with the ACG today.  No wattbike, no walk, nothing but the usual household stuff, and a couple of trips to the tip.  Even though the sun was shining and it looked lovely out there, I resisted temptation.  I even made myself sit down and spend a couple of hours watching the sunny world go past the window while I read my Kindle instead of getting out there in it.

Just as well I did really.  Because yes, I managed to ride with the ACG.  Well, I went for a ride with the ACG.  I just wasn’t always with them ;).  I bet it would have been even worse without a rest day!  Predictably the weather, having been lovely yesterday when I couldn’t ride, was wet and properly windy today.  But not cold, which was the silver lining to the clouds above.

Guy had put together two routes – both heading out for coffee at The Strawberry Line Café in Yatton, and then diverging on the way back at Wrington to allow some people to do 70+ miles rather than the usual 30 or so.  Well the first half went as billed.  A posse of 9 or so of us (I never did count), including a newbie who rocked up looking quite clearly as if he knew what he was doing (hi Clive!), went out with an impressive tailwind to Winscombe, Sandford, and then Congresbury before a loop round the flat bits there to our coffee stop.

My ability to fall off the back of the pack was not aided by my chain doing its usual job of falling off going downhill,  in Sandford, at which point I nearly lost them all completely and would have if Jon hadn’t waited for me, and we hadn’t just managed to espy the group heading off around the last visible corner once I did get going again…  And then there were more things that seemed like hills to me but not to anyone else, and I fell back behind everyone and pootled, and did what I could.  But I wasn’t downcast.  Hey, I was still riding the bike, right? :).

We bumped into another group of cyclists while wiggling around the flat bits, which turned out to be Helen and her mates.   It got quite confusing for a bit remembering who to keep up with and who was going where!  Eventually we disentangled after a bit of a catch up, and went our separate ways in the drizzle.  Coffee was definitely called for after slogging into what was by now a quite unpleasant headwind, and the café was as lovely as ever, though they probably won’t all that impressed with us totally steaming up one of their rooms!  I was proper tempted by the gluten free lemon polenta cake but the way I was going there was no way I’d have worked off the calories – unlike the lads who quite justifiably decimated their stock of chocolate marshmallow brownies!  Dad rocked up and joined us  for a bit too, which was nice, especially as I’d forgotten to remind him beforehand ;).  Mind you, it was very nearly the most expensive coffee stop ever…! 😉 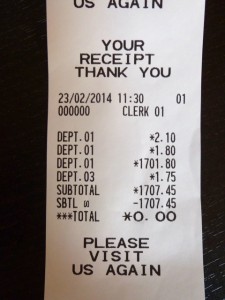 So, how to get home?  Well Guy’s long route was never going to be for me – just not quite there yet.  But the short route would have been a bit boring, and I hadn’t done a hill and I sort of wanted to just to test the water, not just ride through it, as it were! 😉  There was debate and discussion and the weather conditions and…well, we all ended up heading back the same way.  Back through increasingly damp lanes to Wrington, though I had as usual forgotten to restart the Garmin, so it wasn’t quite as direct a route as it looks!  I did however realise my error before the hill we’d opted for – Burrington Combe.  Well, I was kinda curious to see precisely how badly I would do it.  Actually I quite enjoyed it, even in the drizzle, and on my own.  Apart from the odd twinge, it went just fine.  Slowly as predicted, but then why push?  I did my “in the now” thing and just sort of enjoyed the fact that it was all working.  Even with the wind pushing me sideways from time to time nearer the top.  I was so pleased once I’d made it to the top – look at me, I did a hill!  :D.  And I wasn’t the slowest either, there were even a couple or riders behind me.  Not gloating, honest, more astounded! *grin*.  I’m still putting faith in the twinges being post op, I’d rather not start considering the alternative just yet…

From there we slogged our way across from Charterhouse to Tyning’s Farm, benefitting from some unexpected shelter from the trees and hedges there.  The very top last exposed bit at the end was…interesting…but then there was the fun of going down Longbottom and then Shipham Hill.  That I can still do, and I did, and it was fabulous :D.

Due to my technical ineptitude my stats are a little off, but these will do:

I used to be able to keep up.  Hopefully one day I’ll be able to do so again :).

2 thoughts on “Those were the days my friend”