Here I go again.  But not on my own 🙂 Whatever today’s lineup was due to be, and whatever their plans, Sean, Guy and I were for the short route.  Which didn’t make the alarm clock’s siren call any more appealing, or the usual porridge any more appetising, but did mean my spirits were a little higher than they might have been otherwise.  Other than that, the morning was pretty much an action replay of Day 2, up to and including parking outside Edgar Hall and its admirable toilet facilities.  This time we actually met Guy in the car park, so it was a trio of riders, nay musketeers, that headed for the final countdown. 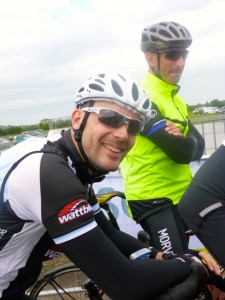 Day 3 of the Tour of Wessex is always slightly quieter.  There are less riders all together.  Those with the long day, and it is a long day, ahead of them are well aware of the fact, those of us doing the short route know that it’s only 57 miles, and by comparison a walk in the park.  Or a cycle in the National Park 😉  I keep having to remind myself that, for all I’m not on form, for “normal” people 57 miles is not only 57 miles, it’s actually quite long way!  I’m trying to learn to compare myself to my own standards not other people’s, so just for my record, I’m better than many, if not as good as those I’m lucky enough to cycle with 🙂 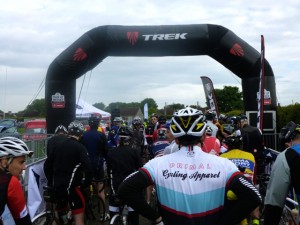 So, another day, another wait at the start line, and another weather forecast not quite living up to expectations.  Rather than being the best of the three days as it originally suggested, it was looking like rain…albeit warmer less windy rain.  Good thing I was going with the same strategy as Day 2 and that the waterproof was already on then.  The commentator was still being impressively cheerful, not entirely sure how, but then again, he’s paid to be cheerful, we’re not.  And a morning on the start line wouldn’t be the same without the usual grumpy old man interjections from Guy.  He still isn’t a morning person ;). Martyn, who had joined us, was looking remarkably spritely for someone two days into the long route though – most impressive! 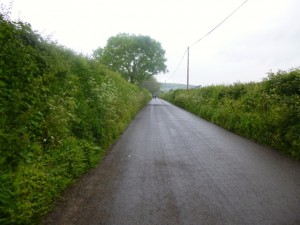 However knowing I was doing the short route was pretty good for the PMA.  Even I should be able to manage that, right?  And having looked at the route, there was only one really big hill to be dealt with.  Let’s ignore the fact that any sort of incline is a problem for me, and focus on that, right?  Either way, I was feeling pretty cheerful.  Even when we set off and the rain started…we just headed West, hoping it would be peaceful there.  Yes, there were the odd drags up, but that did mean I got to go down too, and that’s about the only time I can ever drop Guy and Sean, so when I could I did.  Only to be caught as it went up again.  Fair enough 🙂

I know these roads quite well and after the first few miles of that, it’s fast and flat, and ok “fun” might be pushing it, but I knew I could do it.  We worked mostly as a group, got occasionally peloton-ed, as groups of the more ambitious went by, one of which swept Martyn away with it.  We got a little damp but not too much, the miles passed, and we were headed for the delights of Bridgwater.  Not my favourite place, and the wiggling route through it, including an interesting dual carriageway crossing, wasn’t much fun either, but at least the residents weren’t up and at us yet!  There really isn’t any other way to get to Exmoor, so let’s call Bridgwater a necessary evil, rather than some of the more impolite things I might sometimes call it 😉 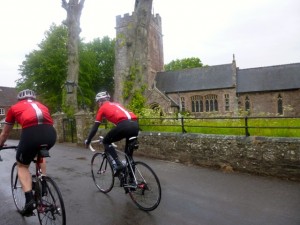 We’d spread out a little as we left town and headed for the hill(s), so it was just me for a while.  An ambulance hurtled past me which is rarely a good sign, but since the motorcycle outrider who kept me company for a chat for a while knew nothing about it, hopefully it was a non-cycling related emergency.  I appreciated the chat too, very sociable.  I wonder if he talks to everyone or just the girls? 😉  Besides, I knew what was coming, and I wasn’t in any hurry to get there even if the weather was a little drier.  I was pacing myself, that sounds better than just being slow, right? 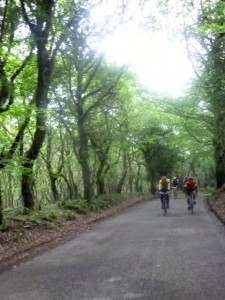 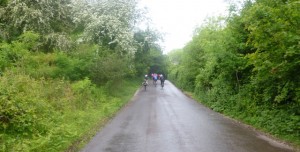 And the climb up Crowcombe Hill, albeit from the lesser side, was, as I remembered, a doozy.  The first section is the worst, but even after it stops being quite that steep it’s steep enough and it goes on for a very long time!  But it was pretty, not too busy, I’ve done it before so I knew it was doable, the odd rider chatted to me, and the recumbent overtaking us all provided novelty value!  Finally I reached the flat moorland section across the top, which gave me time to catch my breath and enjoy yet more scenery, before nailing it on the descent the other side *grin*.  I remember it being worse, wigglier, more difficult, scarier?  Last year there were nutters hurtling past me on the outside.  This year I guess I was the nutter *grin*.  Oh but man, it was fun.  SO much fun 😀 Still didn’t make it over 50mph though, sadly I was being a little cautious and it’s not that long.  One day… 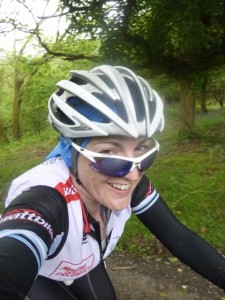 I was a very happy bunny when I reached the food stop shortly afterwards and met up with Sean and Guy.  Not only was I halfway round, I’d made it up the hill without walking, and I was halfway closer to the pub!  Plus the sun was practically shining.  What’s not to love?  Well, the very cheap pasties and mini scotch eggs since you ask. The latter were tolerable, but the pasties?  No idea what the little they were filled with was, but it wasn’t pleasant!  At least the hall was open this year and I nipped to the loo while Sean and another Cyclosport rider James caught up – I’d seen him on Day 1 and it was nice to see him again.  Practically a reunion 😉 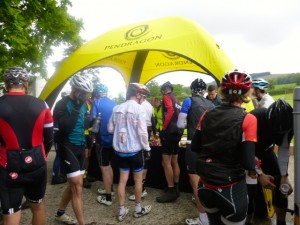 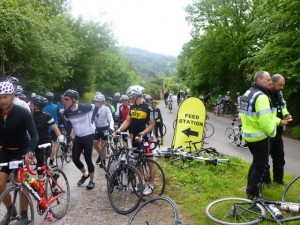 My buoyant mood carried me for quite a few miles after that and we had some fun doing the fast (ish) thing.  Well I did anyway.  The weather was brighter and so was I!  Not that this would last, I settled back down to average fairly shortly, a girl can only keep such things up for so long.  Sean got further and further ahead and eventually the elastic snapped and he was off completely, leaving just Guy and I to negotiate the country lanes home.  There wasn’t much to trouble us really, the odd up that he probably didn’t even notice and I probably did.  Nonetheless he stuck with me, waiting as necessary, which is just as well, since when the right turn in East Lyng was missing and we found ourselves nearly at Athelney, it was nice to be lost in company, and to have his gadget to tell us when we took the right that seemed right and rode for a bit that we were back on the right route.  No Somerset is not flooded anymore, contrary to public belief, though the three folk opportunistically collecting for “the flood charity” at the traffic lights there weren’t deterred.  I’m not sure they were entirely legitimate either! 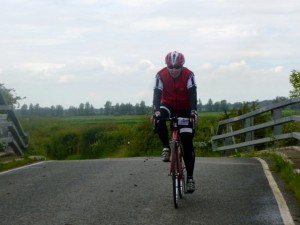 Not far to go now, on still quiet roads, since even the very fast would be hard pushed to have done the long route and made it back to us already.  And knowing we were nearly done was good.  There are three nasty drags on the road back from Langport to Somerton that just can’t be avoided.  They didn’t hurt quite as much as last year, but then there weren’t so many miles in my legs this year.  3..2…1…  They still weren’t fast though!  But that’s ok, we were nearly there, and the Finish Line was mentally in sight, and then literally in sight, and then I was over it, to meet Guy who’d unsurprisingly got there a little before me on the other side, and the Tour of Wessex was done for another year.  Or the final year, as Guy, the Stephen Redgrave of the Tour of Wessex, would have you believe ;).

Guy and I found Sean loitering in the food tent, and I had another very good “short” americano, as Claud the Butler had now christened such less diluted espressos.  Well short route, short coffee, right?  😉  We collected our medals from the table at the end, though we could have been anyone (no-one checked), and generally wasted some time.  However just like last year, the event was packing away around us.  Already.   And we were on the short route!  There was no sense of…fanfare, ceremony, achievement…oh, I don’t know, the word escapes me.  Maybe I’ll come back and edit this when it occurs to me*.  Or not – so you choose your own word in the meantime.  I just feel that if you’ve done three days riding, you should have a welcoming reception committee, a special medal, anything to gild the lily.  Everything should all be there and still happening.  You’ve paid enough and worked hard enough after all, and I’m sure many felt a distinct sense of anti-climax when they finished, especially on the 3 day long route, which is such a shame.  It all seems to be cut off too soon, a bit like the timing mat each day!

Anyway, enough of that.  Tour of Wessex Day 3 done.  Even if was the Tour of Wessex “Lite” by some standards.  I’ll have you know that’s still 220 miles in three days, which is not to be sneezed at I reckon.  Not when you consider the year I’ve had.  And it’s all good training for whatever is to come next too…miles in the legs etc…so it’s all good. I got to ride my bike for three days with friends, and that doesn’t suck.  I was expecting to feel bad about letting myself, and others, down, but you know what?  I didn’t, and I don’t.  I did ok, and ok is good enough 🙂  And no, I’m not doing it again.  Please remind me I said that 😀

*sense of occasion…that was it!