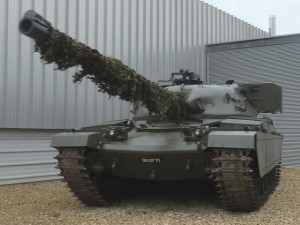 Right then.  Time for the final sportive of the season – the Wiggle Bitter Beast Sportive.  Which I’d really been looking forward to, oddly, because it’s a part of the world I really like, and cycling around the Jurassic Coast seemed like a pretty good way to round off the season.  However as the weekend drew near, so did Storm Barney and although it was due to have blown over by then, and yes I did do that on purpose, there were still some pretty impressive winds due to be blowing around on the day.

Hm.  I hate wind.  Which I’m sure I’ve mentioned before.  And with 40-50mph winds it’s not just that I don’t like them, they can actually be dangerous.  But I wanted to do it.  But 2 hours is a long way to go to then be miserable for 70 miles.  But I hate bailing.  And then my work threw an extra spanner in the works.  Having been doing the social media for the Cairo-Cape Town world record bike race attempt for the previous few weeks, it turned out that the team were now due to arrive in Cape Town, and break that record, somewhere around 4-5pm on that Sunday.  Their time.  Which would be 2-3pm our time.  And I really needed to be home or at the very least on-line for that, to keep the world updated, follow them in, and spread the word afterwards.  Quite important really.  No point doing the job and then missing that bit! 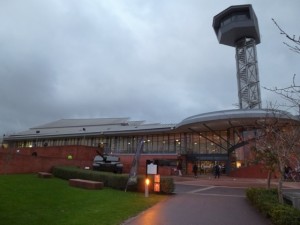 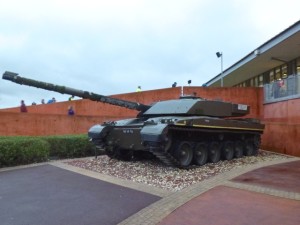 To cut a long and clearly not that exciting story short, after a little encouragement from others, I made a decision.  I’d do it.  I’d get up at stupid o’clock.  Drive to Bovington Tank Museum.  Do the shorter 40 mile route.  Drive back, and be home in time to get to work.  OK, so that all seems like a bit much to just do 40 miles but, as I said, I hate bailing, I wanted to do it, and more than that, since I’d been given a place so as to review it, I really felt like I should do that.  Yep, I’m still pretty conscientious 🙂 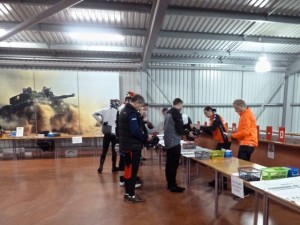 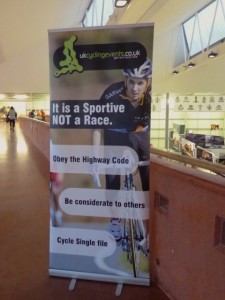 Which brings me to HQ, at Bovington Tank Museum, on a very windy, chilly, grey and slightly damp Sunday morning.  I was amongst the first arriving, having aimed to be so, with my usual “sooner started, sooner finished” thing going on, and was marshalled to park in the museum car park.  I was sort of midway between the start line and the main museum building, neither of which were far away.  Time to register before faffing then.  Which I quite enjoyed.  Well, registering for a sportive doesn’t usually involve quite so many tanks, and it was quite nice to get a peek at them all without having to pay.  As eldest has just done his EPQ on how tanks developed as a result of and through the course of World War II, it turns out I’ve recently had quite a lot to do with tanks, and having seen the place for myself now, we’ll definitely be going back next year to pay to visit it properly.  Tanks are cool, right? 🙂 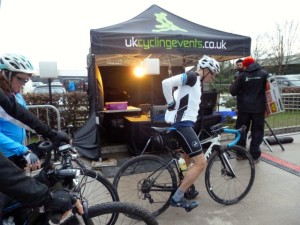 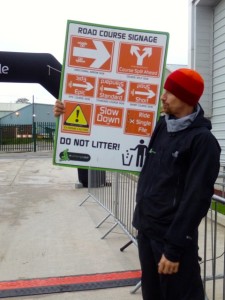 Not only did I get to look at tanks, but registration was also inside, warm, dry, and had plenty of facilities.  And it was also easy.  Sign up, get a map, bike number, three cable ties, and the essential helmet timing chip.  No queue.  Unlike the Gents.  But not the Ladies.  Result 🙂  There’s always a perverse pleasure to be be taken from walking past their queue…  Schadenfreude?

All that being done, t’were time to get back to the car, layer up, load the bike up, and head for the Start line.  Being amongst the first at a smallish event where I imagine the no-show rate was fairly high too, thanks again to Barney, there were only a few of us waiting to be briefed, so it didn’t take long, and all of five minutes later I was off. 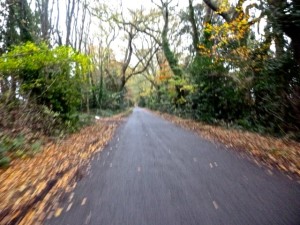 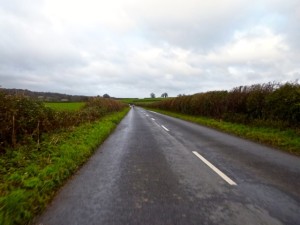 To be fair, although yes, it was bl**dy windy out there, it wasn’t quite as bad as I’d worried it might be.  We were starting in the top and middle of a loop so…it goes something like this.  Out into the wind for a bit.  Down with side winds.  Along with the wind behind.  Up with side winds.  Back into the wind to the Finish.  Well, ish.  What with there being quite a lot of trees around, there was more shelter than I was expecting.  Still, it was bl**dy hard work quite a lot of the time.  I have to say I wasn’t really feeling it.  I’d definitely felt better on the bike.  As Alan might put it, I didn’t have any zing.  But since I knew I only had 40 miles to do, it wasn’t really a problem and my PMA remained relatively intact. 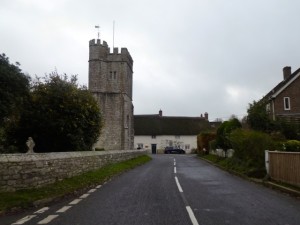 At least while slogging along there were thatched cottages and churches and villages and things to look at.  And colourful autumn leaves.  Well ok, a lot of them were on the road rather than on the trees, but hey, they were still pretty.  Quite a lot of the land around there is military owned and not developed, and a lot of it also seems to be forestry, which keeps it feeling lovely and peaceful and rural.  There are tank tracks, tank ranges, and military camps all over the place, all of which made the Tank Museum the perfectly logical HQ I think.  The military land also came complete with red flags flying, warning that today trespassing on that land would be even less of a good idea than usual 😉 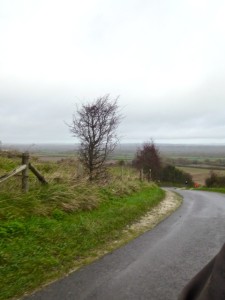 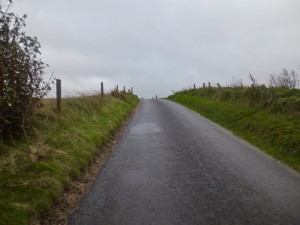 I’m was pleased to discover that there wasn’t too much climbing involved to make life even harder.  I know there are some nasty hills around there, but every time we got near one of those that I vaguely remember, with my heart sinking, we’d end up not going up it and going in a different direction.  This is not to say it was completely flat though, there were some ups, even the odd steepish one.  The worst climb I think was the long drag down south, up to the coast.  It went on for miles.  Literally; it didn’t just feel like it did!  Still if you’re going to get views, you have to go up, right?  Sometimes up there you could even see the sea!  OK, so I didn’t get to be by the beach this time around, but the sight of the sun breaking through the clouds and over the sea, if not over me, was well worth it.  And after however long slogging up there, the lovely descent into West Lulworth, which I realised was coming about half way up the hill, was a joy 🙂 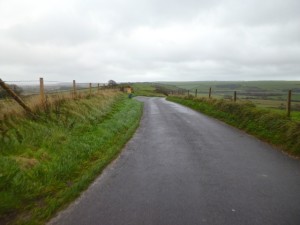 West Lulworth, about 26 miles in, was also where the food stop was.  Marshalls were trying to slow arriving riders down, and there was a degree of chaos with riders deciding what to do, going in, coming out…  Since I was feeling fine, and only doing the short route, I decided I really didn’t need to waste time, or intake food/drink (I travelled equipped as ever), so I just wiggled around them all and kept going.  It being a Wiggle event I imagine it was as well stocked as ever though, they’ve had enough experience by now! 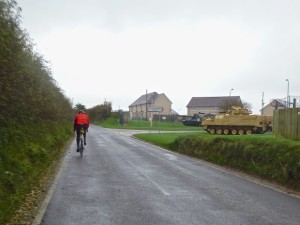 What goes down must go up sadly, and it was quite a long steepish climb back up from there.  However this I knew, having done it before, which always makes up easier to deal with, and I just engaged crawler gear and got on with it.  The wind was now essentially behind me and I won’t pretend it didn’t help push me up there a bit too.  Sometimes wind is ok 😉  Having saluted the gate guardian tanks at Lulworth Camp near the top, and put the climb likewise behind me, the wind was more than ok for a while after that too.  Wheee…..!  Who’s going to turn down a few miles of sort of down/flat with a storm behind you?  Not me 🙂

Time for the route split then.  On another day I’d have loved to do the long route.  Having looked at it beforehand I had noticed however that it didn’t include my favourite road here – the long climb up the coast past the tank target ranges, and I had half considered doing it anyway just for fun.  It would have been the more logical way to go for the long route too…so I had been a bit bemused as to why it wasn’t en route…but the big red flags, and a road closed sign, explained why it wasn’t included.  It also meant that I wasn’t going to be doing it for fun today either.  Ah well, maybe another time?  Waving a slightly regretful farewell to the road ahead, where Corfe Castle and Swanage beckoned, I took the left turn, turned tail, and headed back. 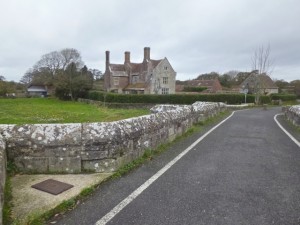 The return leg wasn’t quite so much fun, putting me gradually back into the wind.  There were some interesting wiggles to get around main roads and junctions, and after hurtling off one big roundabout to get away from the traffic I missed the “turn right almost instantly” sign and nearly ended up in a military camp…though I’m thinking the armed guard and massive security gate might have prevented that from actually happening!  The small bit of cycle path not long after, which would normally annoy me, took in a very pretty bridge, river, and small country pile, which placated me nicely 😉  Back to the road, and not so long after that I was being welcomed back to HQ by big tanks, and riding under the Finish arch. 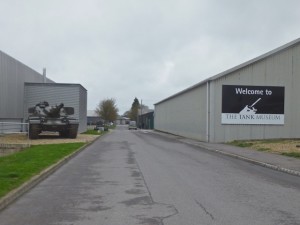 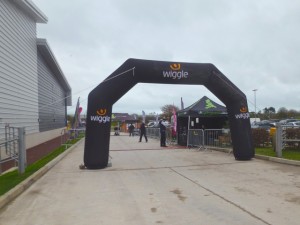 After owning up to my Short route choice, I was presented with various goodies and a Wiggle Finishers t-shirt.  I caused some consternation by asking for it in Large. “What, really?”  Which I cleared up by explaining it would end up on eldest not me.  At least they didn’t just look at me and go “yeah, no kidding” 😉 *grin*.  And there you have it; Wiggle Bitter Beast done.  And, as it turns out, even though it felt like hard work, and not stopping probably helped, I got me a Gold time!  Woohoo!  I’ve added it to my list of events to go back and do next year, to do the long route – but there’ll be no gold for that I bet 😉

I took myself back to the car for a quick change, and a quick trip to HQ to powder my nose, and then the not so quick 2 hour drive back home.  I didn’t have time to hang around and besides, I have a new sportive tactic now too – pre-load the car with fizzy orange so I’ve always got some to drink afterwards, so I didn’t need to spend time finding some.  Remind me about that next season? 🙂 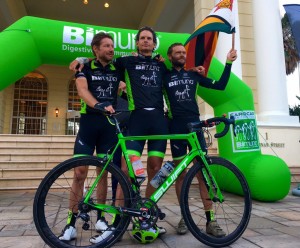 You’ll be pleased to hear I got back home in time.  As did the CAROCAP team, albeit a few hours later than planned – the wind did for them too!  They did what they planned to do, I did what I planned to.  I got a ride in, I (finally!) reviewed it, and I was home in time to spend the rest of the afternoon/evening sat on the sofa, on Facebook and Twitter, live posting the team in and playing a very tiny part in their amazing record.  They cycled from Cairo to Cape Town in 38 days + some hours, beating the previous record by around 3 days.  Which puts 40 miles around the Jurassic Coast well and truly into perspective, doesn’t it? *grin*. 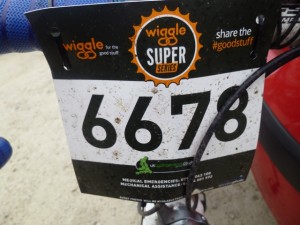 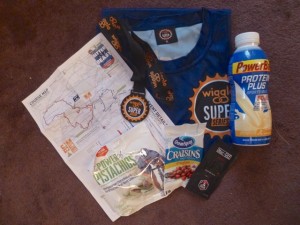