Sometime last year I signed up for 3 of Performance Cycles Winter mini-Sportives, in an attempt to keep getting the miles in over the winter.  I missed the December one because I wasn’t well and over-slept.  The January one was also a no-show as I was ill (I’m sensing a theme here!).  Today was the third of them.  Sadly I’m still not well, and I added the after effects of the wedding into that mix, but there was no way I was missing another one, especially not as it was the first of this year’s planned events.  I’m stubborn like that!  Besides, if I’m going to continue to be ill, then I’m going to have to learn to cycle ill!

So, 6:00am.  Dark outside.  Cold inside and colder out.  Ah…that familiar feeling again.  Yep – time for a sportive :).  The car was already loaded up, partially as a preventative measure so as to give me no excuses to bail this morning.  It was just a question of putting on every layer I own, grabbing coffee and a breakfast banana, and hitting the M5.  As I headed north the sun was rising, and the street lights were going out as I went past them, which was a little surreal…

You have to wonder what planet cyclists are on sometimes…driving 80 miles to go ride a bike in the snow and ice in February?!  And before you go thinking it’s just me who’s nuts – I had company.  My mate Kevin joined me, along with 40 or so other hardy souls (from the 100 signed up).  Hardy souls or foolhardy?  Either way I guess that makes us all badass right? ;). 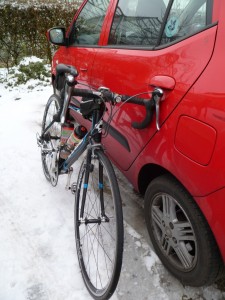 two things that should not really go together - my bike and snow! 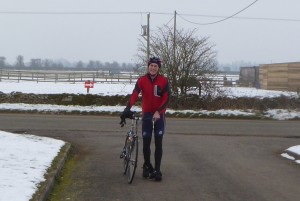 It might have looked horrible out there, but it wasn’t actually as cold as it could have been, or as it has been lately.  Which was just as well since it was quite cold enough, though thankfully not very windy.  They’d re-done the route to stick to less minor and therefore much clearer roads, which was a good thing.  I’m actually vaguely familiar with the area usually…but not when it’s covered in a blanket of snow!  White sky, white roads, white scenery…  Quite pretty in a winter wonderland kind of way, but actually a bit boring and featureless after a while!  Especially as you can’t really be spending your time looking at it when paying attention to the potentially icy road is a far better idea… 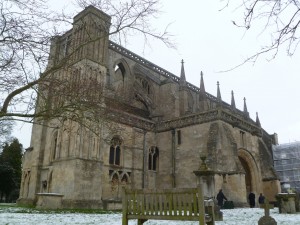 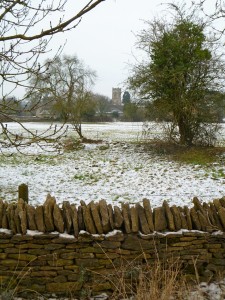 Actually I shouldn’t have seen the second church, as it came a while after we (and several others) missed a crucial “turn right” sign, so I actually got to see it twice when we re-traced our steps trying to find our way back to the right route.  And we all know that re-tracing a route is wrong… 😉  As we were huddled together trying to figure out which way to go, there was the added amusement factor of being berated by a “lady” horse rider (of Thelwell proportions), in tones that could have cut glass, that we hadn’t even passed for having passed her too closely,   We thanked her very politely for sharing her opinion of cyclists with us…as opposed to helping us find our way to where we were supposed to be.  Apparently if we don’t behave correctly we shouldn’t be surprised when she comes past us too close when towing her horse box. Charming!  Maybe it was her who moved the sign we missed?

Anyway, as we were retracing our steps, eventually we found a sign for Tetbury, and since Tetbury was on the route, we just headed for there, somewhat surreally going past Westornbirt Arboretum which I hadn’t realised was quite there.  Geography never was my strong point – ask anyone.

It was, by necessity, a fairly flat route.  Mostly.  A properly nice lady, who we politely accosted once in Tetbury, pointed us in the right direction for the road to Minchinhampton whilst warning us about the steep hill and the dodgy right turn half way down it on the way there.  And she wasn’t wrong!  Thank you nice lady – things could have gone distinctly pear shaped if I hadn’t know about that in advance.  As it was, it was a choice between indicating or braking, and unsurprisingly braking won hands down, so I’m glad the car behind us was paying attention too!  After such a descent there was bound to be an ascent but once in hill mode it was totally doable.  Having a proper hill to deal with is way easier than those stretches of road where you realise it’s harder work than it ought to be and that there’s probably a gradient going on, which happened several times today. 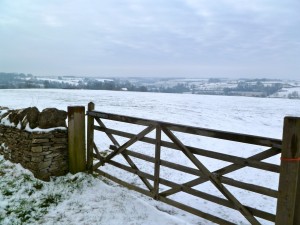 I said it was snowy, right?

We took a breather for refreshment and photo ops near the top, as you do.  Well, not being on form, I need to stop to get it together a little more often than usual.  At this point we ending up playing tag with Mr and Mrs Specialized.  We’d met them when we were all lost, and ridden with them, dropped them, been caught by them when in town…  On balance we were a little bit faster than them, and we had quite a lot of fun on some long straight fast bits trying to prove this to them *grin*.  I may not be on form, there may not be a lot in the tank for sprinting, though I did have fun trying from time to time (I do love sprinting *grin*)..but I can still keep up on the flat if I have to :).  Kevin manfully rose to the challenge and led the race for home, and I cheerfully sucked wheel to get me there too.

Thanks to our little unintended detour the “short” route ended up being nearly as long as the long route would have been so when it came to a choice between heading for warm refreshments or adding another cold 15 mile loop to the total…there was no choice.  And look – they even had my current beverage of choice – soup!  Not to mention cake and bacon butties – all included in the bargain £6 entry cost. 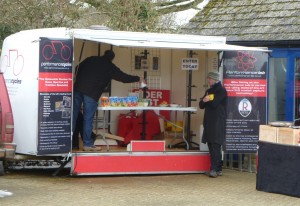 Actually, that was pretty fast, no?  Faster than I had any right to expect to be, and way faster than I would have predicted during the 45 minutes it took me to warm up, when I was feeling pretty hellish.  If I hadn’t had the event to do, today would probably have ended up being another sofa day, and I’m very glad it wasn’t :).  *fingers crossed* we get me fixed and back on proper form soon!