“or there and back again“.

I was away from home this weekend.  A trip away so as not to be home alone for my birthday weekend and Mothers’ Day really.  A weekend which included sunshine, seaside, and of course, riding the bike.  Which in this case turned out to be from Corfe Castle to Lulworth Cove and back again.  Thanks to various events, it’s a chunk of road I’m pretty familiar with, but only in one direction – west to east.  It’s also oddly one of my favourite bits of road anywhere, for lots of reasons.  It was part of my first ever sportive, Day Two of the Tour of Wessex, done in a day of torrential relentless rain and misery, and is thus forever etched in my memory.  I like it because it’s a challenge, because the views are stunning, and because I’ve slowly (slowly being the operative word for me and hills of course) gotten better at it.  From the first time when I had to walk a bit, to the next time where I just took a breather, and to now when I know I can do it and that I just have to steadily plod up at my own pace, and I get up in one go every time.  That’s getting a bit ahead of myself though… 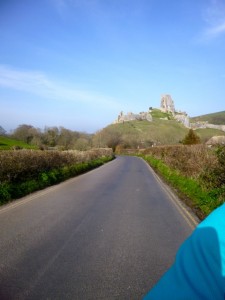 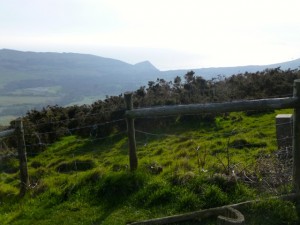 We started off from the National Trust car park at Corfe Castle, in fairly mild but breezy sunshine.  Mild enough for shorts and short sleeves for hardy northerners like Chris, but not for me!  I didn’t know the route this way, so the outward leg felt much longer than it was.  Wiggly country roads, climbing a bit every now and then, ending in a big climb up to the ridge along and above the Bovington Camp tank ranges, where the wind was stronger and the views of where we were going were stunning.  You never see Lulworth Cove from above going the other way, there isn’t time to nip into the car park and have a proper look, like we did!   You also never see Lulworth Castle, which when you see the size of it you wonder how you have ever missed it, but once again, it’s behind you and hidden by trees going the other way, whereas this way, on the big descent off the ridge, it’s right in front of you and pretty much unmissable, if you’re not too busy flying down the hill as fast as possible of course.  Which would be why I saw it and Chris didn’t 😉

Once down at tank level again, there’s a bit more gradual climbing, and then you’re flying down the lovely descent to Lulworth Cove, and picking your way through the grockles, and families with toddlers in wellies, and groups of henrys hooraying around their obligatory ice-creams, down to the beach to see the sea.  To see what you can see see see.  Not a place to hang around too long, what with the cove seeming to be funnelling the chilly wind right at me, but beautiful nonetheless.  I even bought a souvenir, it seemed the right thing to do 🙂 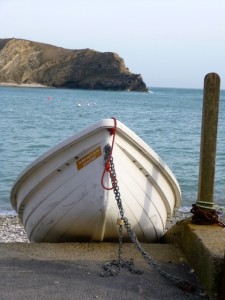 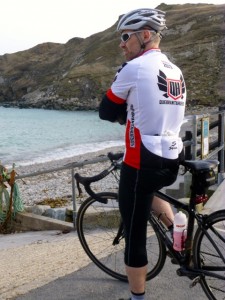 We re-traced our steps back up a bit, takeaway coffees stashed in bottle holders, which was a first for me, to where all the cafés and shops are.  Thanks to my usual degree of forethought I’d not really eaten since lunchtime the day before, which meant that finding something safe to consume was probably wise, not to mention essential, since I’d already felt the odd wobbly warning on the way there.  Luckily one of the cafés had a gluten free bar thing which, for a change, wasn’t a chocolate brownie and which also tasted nice – bonus!  Thus refreshed with food and caffeine, it was time to head back the way we came.  However the weather was getting windier and chillier and even though I knew big hills were coming, I am starting to be more aware of how I am with cold, so I decided to put on my lovely Rapha waterproof on first.  Rather get too hot and remove it than t’other way round, I decided.  Besides, I rarely wear it, and I like it 🙂 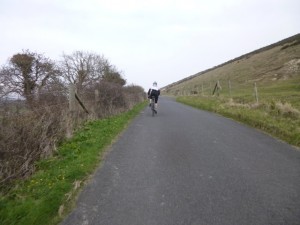 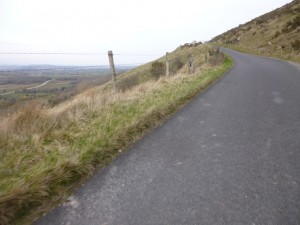 Sadly climbing up the hill back out of Lulworth, it became clear that although I might have been thinking that I was better these days, and that the pain had gone away, I was wrong.  In a fairly big way.  That’ll teach me.  When will I learn?  Whilst this may have provided me with the perfect excuse, sorry reason, for how slowly I was about to go up my favourite climb, I was actually pretty disappointed, not to mention upset.  B*gger.  *sigh*.  These days I do actually quite like hills you know (not that anyone believes me after years of hating them) and I’d actually been looking forward to seeing how I’d do this time around.  Proper annoying.  I know, I’m wingeing again, maybe I should be shot and put out of everyone else’s misery? 😉 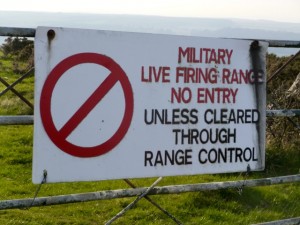 Left to my own devices, my only option was to take it easy and do the best I could do, so I did.  At least with the waterproof on, I wasn’t cold, and I also wasn’t doing that boil-in-the-bag thing, so the extra layer turned out to have been a good call.  I concentrated on trying to retrieve some PMA from the depths, on not wallowing too much, took some photos, counted the targets, looked for trashed tanks, and admired the views; anything to distract myself from the pain, and while it may have not been the most pleasant or enjoyable ascent ever, I still made it all the way up again.  Which made for a pretty happy and proud me at the top 🙂 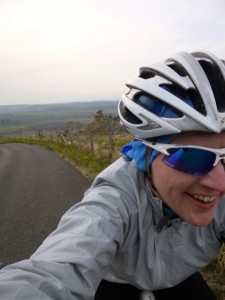 The rest of the ride back went faster, being far more familiar, and also finite, since now I knew where we were going which on the way out I did not.  Fun and flat long the ridge with the wind more tail than head now, and with more of it.  The lovely descent back down the other side, far more enjoyable in the dry, though wiggly enough to necessitate quite a degree of caution in case of traffic coming the other way.  Country lane ups and downs.  I pushed along on the flats, which I enjoyed almost as much as normal.  Which I would then pay for for a bit as my insides kicked off, and then when they settled a bit I could get back to it.  I even managed a lovely swoop down and then get out of the saddle to kick up to the top of the next climb bit.  Not done that for a while, and it was nice to feel that my legs can still be pretty powerful.  They really are you know.  Though, man, that was some ouch afterwards…so I didn’t bother doing that again!  But no pain, no gain, right? 😉 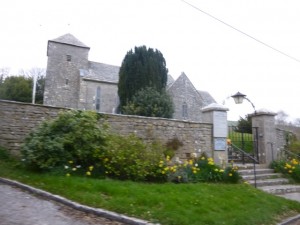 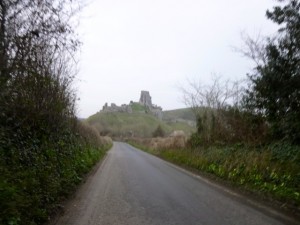 In no time at all, I was trying to take photos going downhill back to the castle, in enough time to still be able to brake enough before the left hand bend, which could have gone horribly wrong but didn’t *grin*.  As you can see, the weather was not half as nice by now, but whatever the weather, it’s a pretty awesome castle.  And if you’re lucky, like we were, you get to see steam trains going forwards and backwards as you get changed in the car park too, which was pretty  much the icing on the birthday cake 🙂

In 8 weeks time I’ll be back here again, as I face the Tour of Wessex challenge again, now knowing that however I’m feeling, I can still get up this.  Now that makes for some useful PMA 😀 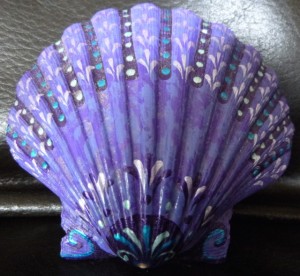