A few weeks back, at the Cyclosport party, I met a couple of people who had been mad enough to cycle all the way from Pembrokeshire to London for the occasion.  On a tandem.  Non-stop.  For charity.  Mad, even if it was for a very good cause!  As it turns out, I ended up sitting with them – Peter and Carlos – at lunch, and as it also turns out, they run the Tour of Pembrokeshire.  We chatted about what I do and what they do, as you do.  Come and do our event next year, they said, it’s great!  So I went away, and I looked at it, and actually, even though it’s properly lumpy, what with the great reviews it’s had and the way my schedule is shaping up for next year, it looked quite appealing.  So I emailed them to say yes, I could, why not?  Great they said.  We’re having a Prologue ride in a couple of weeks.  Want to come and do that too?  Well, you know me, any excuse to go and ride the bike somewhere else.  In fact, considering it’s half term, any excuse to go and ride the bike full stop!

Pembrokeshire is quite a long way away I’ll have you know.  3 1/2 hrs drive providing no-one has screwed up the motorway, which, thankfully, they hadn’t.  Once I’d fallen off the end of the motorway and hit the coast, the scenery was already pretty impressive, so things were boding well for the ride itself.  It being so far, I actually went down to St Davids (Britain’s smallest city) on Thursday night, and stayed at the very friendly Alandale Guesthouse.  Not just friendly, cycling friendly too, being owned and run by a fellow obsessive, so my bike got to spend the night safely locked in the garden shed, rather than in my bedroom ;). 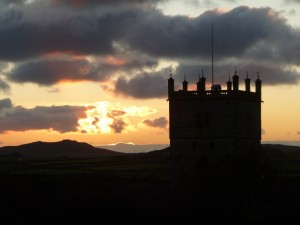 Which brings us to a sunny but early Friday morning, after a surprisingly good night’s sleep.  Maybe that’s because I wasn’t sleeping with my bicycle? 😉  Early alarm, dark outside, strange hotel room, breakfast in lycra…yep, must be a sportive day.  I got me and my kit sorted, and drove us all up the road to the Grove where we were starting from, where various other lycra clad folk were reassembling bikes.  Some seriously impressive kit too – my little Cube and I were feeling a little outclassed as I went in for coffee. 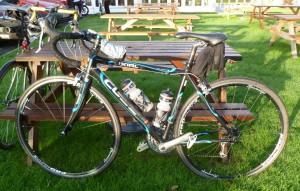 My bike, all ready to go

Eventually it was time to go.  There were to be 3 groups.  Short route (25 miles), Long route (53 miles) split into medium and fast riders.  Well, looking around, and hearing some of the tales of derring do, not to mention knowing that Carlos was leading the first group, I decided that my place was in the medium group.  After Peter’s pre-rider briefing, which meant nothing to me since I had no idea where I was or where I was going, we headed off.  Within a mile, I’d somehow dropped the medium group, and decided to go catch the fast group since at least that way, if I couldn’t keep up, I could drop back later.  Carlos was leading the way, with outrider assistance from an ex-racer called Andy, and the pace was fast but doable.  However we’d yet to hit any big hills so I wasn’t expecting that to last, not for me.   A short while later we hit the first climb of the day, which was pretty indicative of how most of them are – down into them, steep sharp short up out.  Not always that short either.  But mostly you can see the top isn’t far off, so if you have to get out of the saddle, you know it’s not going to be for too long.  Obviously there were exceptions to the rule.  The 25% climb in the middle that wiggled alpine stylee and then went on for more.  The newly resurfaced climb out of the valley which meant that the road, smooth and lovely as it was, wasn’t much use when you hit mud and leaves, end up in the (soft, wet, comfortable) verge, and need to get back on again (I had to walk a few metres until it levelled out sufficiently).  The long climb in the middle (much shallower) that went on and on even though you were already sure you’d hit sky.  But man, the scenery was stunning.  And the views! 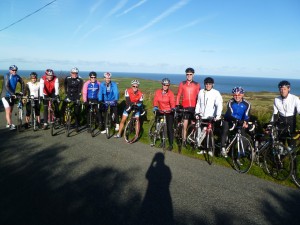 The fast group, the sea, and my shadow 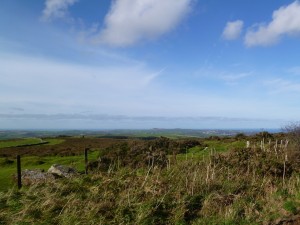 Hard to do the views justice

I gather the weather for last year’s event left a little to be desired, and we were totally blessed yesterday.  Sun, mild temperatures, not much wind….what more could you ask for?  Shame you can’t book that when you’re organising an event isn’t it? 😉  But if it’s even half like it was yesterday next year, it’ll be awesome.  In fact even without that it’ll be good – as it’s a real challenge.  There’s not a lot of flat, lots of climbing, and a lot of the descents are very technical, so you’re not talking massive average speeds here.  There was a nice fast stretch in the middle, which kind of allowed me to get myself together again after the earlier climbs.  Apparently it takes me a lot longer to warm up at this time of year, which meant the first few climbs felt pretty horrible.  After the valley I was feeling a whole heap better, even with the detour onto my bum 😉    I was managing to hold my own – getting partially dropped on the climbs but catching up afterwards.  Actually we dropped quite a few people along the way, so the group got gradually smaller, and we ended up with a sort of hardcore bunch with, amazingly enough, another girl in it!  Well, I guess we’re not girls anymore to be honest, I think we’re probably women.  And in Clare’s case, a time trialling personal training woman.  It did make a nice change to have some female company :). 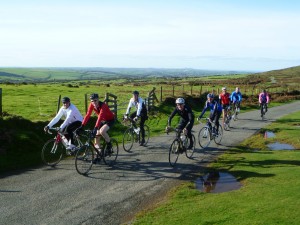 The peloton poses for the camera 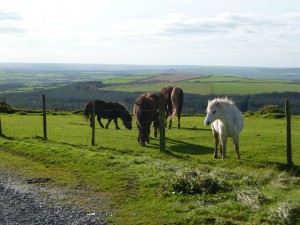 At some point we were pointing towards home, the road switched to undulating, and I tucked in behind the big boys at the front and pushed…which meant I got to do my kind of cycling for a while.  Fast and strong and fun.  I think I acquitted myself quite well, and certainly some of the guys seemed impressed to find me still with them.  I am quite strong on a good day, and it was a good day :).  How good I’ll be feeling next year, after the same kind of riding, with bigger hills, for twice as far, remains to be seen…  Mind you if yesterday was anything to go by, I’ll not be allowed to take a turn at the front anyway, so I’ll be able to wheelsuck the entire way ’round ;).  Peter had described the first group as for the race snakes.  For those of you familiar with AC Cobra terminology, some of those riders were indeed snakes.  Which makes me a fake snake.  Not the genuine article but capable of doing a good impression at times *grin*.

Which brings us back to The Grove, where we started, tired but happy.  The stats are pretty respectable all things considered.  I may be able to climb hills these days but I’m still no mountain goat, so I’m happy with that.  After a quick shower and change at the very welcome leisure centre facilities next door, allowing me to feel practically human again, it was time for lunch and debriefing, with the emphasis being on lunch – and very nice it was too. 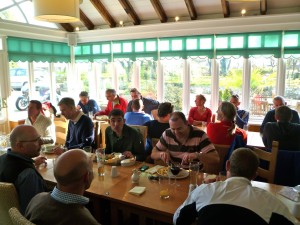 For the very keen, there was the option to burn off a few more calories, but I think the hills had taken their toll… 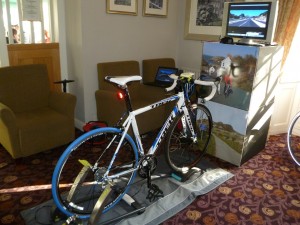 It was a great ride, and a really good taster of what I’ve let myself in for next year.  As ever there are far worse ways to spend a sunny October morning than cycling around stunning scenery in the sunshine.  Yep – still loving my bike 😀