On to the next sportive.  Which was a little while ago, so some of the details may be a little hazy now, not helped by the fact that I failed to make copious notes afterwards.This time around I’m talking about The Black Legend Sportive, run by Purple Patch Running.  Which seemed a bit odd to me.  A running club organising a cycling event?  Weird.  Still, that didn’t mean it wasn’t going to be a good event, right?  It was off to a good start by being based in Hungerford, which is not a long way away from me.  HQ was at the John O’Gaunt School in Hungerford, which is just a 10 minute drive from Jct 14 on the M4, and thus easy for me to get to. 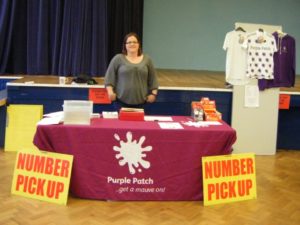 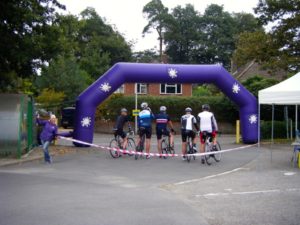 I rocked up sometime after registration opened to discover a small car park that was half empty, and didn’t seem to be filling up fast.  I started to get the feeling that this was going to be a small event…  But hey, good things come in small packages or something.  Registration was in the school hall, once cleated shoes had been removed, where the tumbleweed was metaphorically blowing around…  Still, not having to queue is a good thing, right?  My entry envelope included a bike number, helmet number, and 2 cable ties.  But no timing chip…as timing today would turn out to be a manual affair.  Not that there’s anything wrong with that but still, it was a bit unexpected. 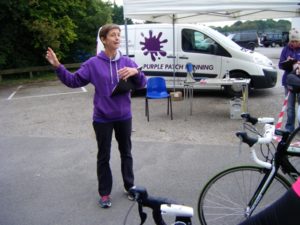 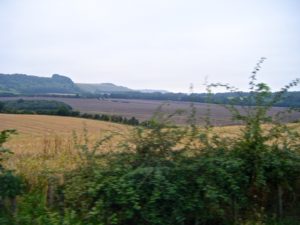 I didn’t have to queue for long at the start either.  I think there were only six or so of us who arrived at roughly the same time to be briefed and sent on our way, as riders had been being let go in dribs and drabs for quite some time before I’d done enough faffing to consider myself ready to go.  During which I discovered that my iPod shuffle had somehow managed to completely run out of charge, even though I’d charged it the day before, so I was going to have to do the whole ride with just my thoughts for company.  Marvellous.  I had three route choices today, the Epic 80, the Standard 65, or a Short 45 miles.  Given that it was only a week since my last sportive, which hadn’t gone well, I was already thinking that taking it easy might be wise.  Lack of musical accompaniment wasn’t going to make the long route any more likely…! 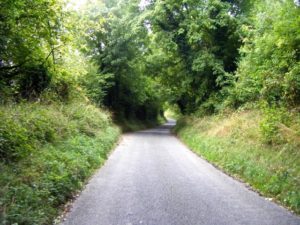 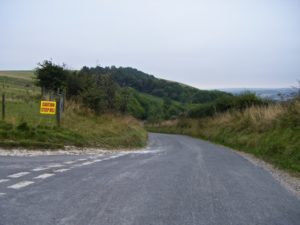 Not that I had to make that call straight away.  All of the routes covered the same first 25 miles to start with so there was no rush to decide.  We headed off and I was very shortly out there on my own, which was how things pretty much stayed all day.  Off out through the affluent area of Hungerford, past a great many lovely properties I’ll never be able to afford.  I went through the village of Inkpen, which made me think of Inkheart, and Inkwings.  After a nasty hill five miles in, I turned left in the village of Faccombe to go up another hill, which made me giggle (think about it…).  Did I mention it was just me and my thoughts?  They do go weird places when unaccompanied and undistracted… 😉  And yes, that was two killer hills in the first 10 miles.  No fair!  It was chilly and grey which may sound unattractive but actually made it easier to follow the route and (very large) signs than the recent early morning dappled sunshine on events has done.  Besides I had my layers pretty much spot on today, having been very keen that I not be cold, so I was a fairly happy bunny with things the way they were. 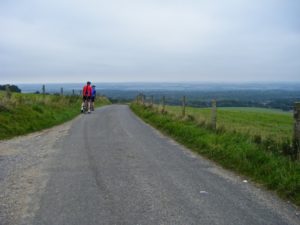 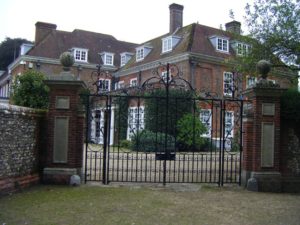 Having gone up there were some lovely views, and I actually passed another couple of riders who’d stopped at the top to take selfies and photos of the landscape, which was novel.  Not the photos – the riders!  I took my photos en route, as ever, but stopped playing David Bailey in time for the steep and rather technical descent.  Things flattened out after this, and also started brightening up nicely.  Things were looking up, but not up 😉 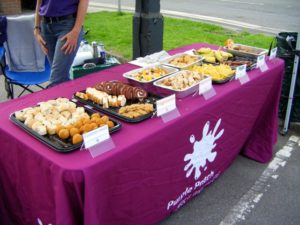 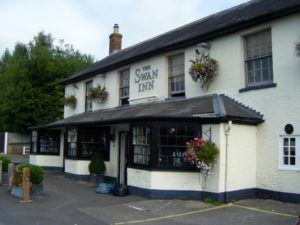 The first food stop came at 25 miles in, the car park of the Swan Inn in Great Shefford where the landlord was very kindly letting his (very swish) facilities be used.  I kinda wished I could have stayed there, it looked like a lovely place, and the thought of sitting in its beer garden in the sun with a cold beer…?  Ah well, maybe another time.  The lady manning the food stop was friendly and chatty and probably bored witless after standing there for hours more or less on her own.  Initially it was just me there, and even when joined by the top of the hill two and a whippet who could probably do the long route twice over in the time it was going to take us three to do the Standard route, it was never what you’d call busy!  And yes, I’d pretty much decided to do the Standard route.  I had places to be later, and no desire to push any boundaries today.  Anyway, the food stop was pretty well stocked (and labelled!) and I discovered that today mini scotch eggs were what I wanted, which wouldn’t be what I’d normally opt for but hey, they tasted good, and I’d been told to make sure I ate properly for a change.  So I sat down, chatted a bit, ate those, and kicked back a bit.  Sometimes it’s just nice to sit still in the sunshine. 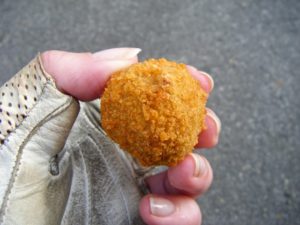 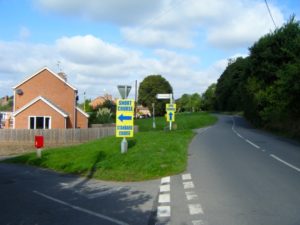 I headed back out again on my own.  And headed into more familiar territory.  I’ve done a fair few sportives around here, and have a couple ahead too.  It’s a beautiful area, even more so under blue skies.  But that wasn’t enough to make me change my mind.  I still turned left 5 miles later at the route split.  Right then.  15 miles to get to the next food stop.  And those miles weren’t flat!  There were another couple of big hills between me and that, but the descents were better this time, and I was loving being out in the sunshine not feeling too terrible and just being me and my bike.  More cute cottages, more well behaved countryside.  All good.  There may even have been some stashing of layers and rolling up of sleeves 😉 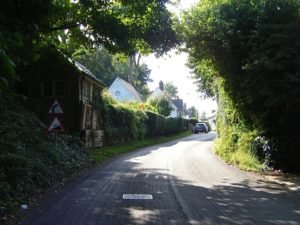 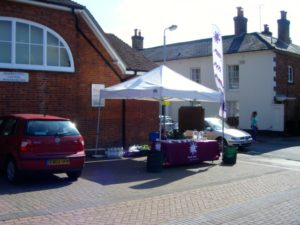 The next food stop was as quiet as the first, set in a little car park in front of a pretty church, complete with a little toilet block – always good.  Once more, me and some mini scotch eggs took a breather sat on a curb in the sun.  I certainly wasn’t feeling as bad as the last sportive but I was still aware that pacing myself and taking it just that little bit easier than I might want to was the way to go. 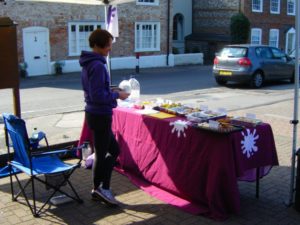 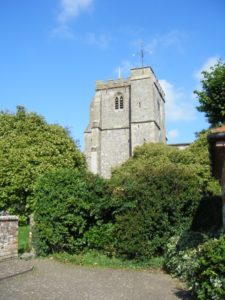 By my reckoning I only had around 20 miles to go, which seemed doable.  Which it was, being more of the same.  Scenic.  Rivers to cross, and canals.  A couple of fairly big climbs.  Including the kicker that is on the White Horse Challenge and that somehow I always forget, I think maybe my memory blocks it out!  And as I turned a corner there it was in front of me again…dagnamit!  It’s long, gets steeper, and wiggles…  Still, I got up it,  Again 🙂  To be let out to play on top of the world for a while, amongst fields of gold, playing tag with the range of awesome cars doing the Classic Harvest Tour, who I crossed paths with several times. 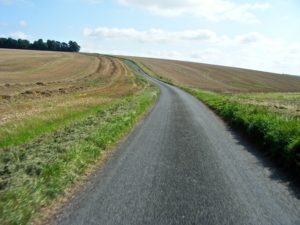 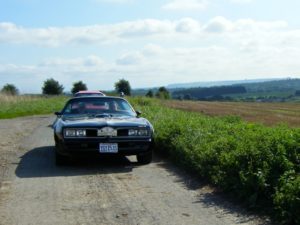 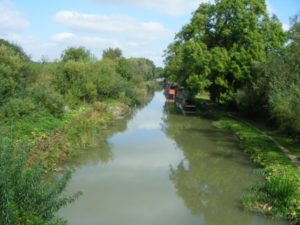 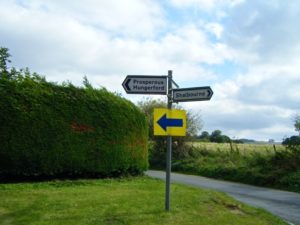 Did you know there’s even a village called Prosperous?  It didn’t surprise me…but it did make me giggle *grin*.  Well I presume it’s a village, not just a adjective used to describe Hungerford, which is kinda what the signpost made it look like 😉  The miles counted down, as I passed from  Wiltshire and back into West Berkshire, and very shortly I was back at HQ, and rolling under the Finish Arch with a complete lack of fanfare, bells, or whistles.  Ah well, at least it was purple 😉  Two ladies were sat watching over the finish line, probably a fairly thankless task, and one of them gave me my medal, while the other noted my admission to having bailed to the short route (though that doesn’t seem to have made it as far as the official times list).  There you go.  Black Legend done. 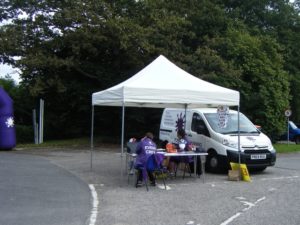 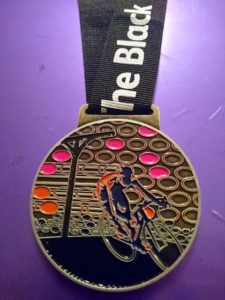 Usually when I write about a sportive I use “we” rather more often than today.  But it was definitely an “I” day.  99.9% of all the cyclists I saw today were not on this sportive, just out on Sunday rides with their teams/groups/whatever.  It turns out that only around 60 riders took part.  Which would explain a lot.  The lack of atmosphere for starters.  I pushed my bike over to the main school entrance and parked up, so as to go to the toilets and try and purchase something cold and fizzy.  Which I did – well kinda.  It was the only can of such on offer – coke I think – and it wasn’t cold either.  But hey, at this point beggars couldn’t be choosers, it was better than nothing.  As I sat outside on the steps drinking it, and checking in with the world, there was just one other rider loitering around, who came over for a chat.  He’d done the whole route and still had a reasonable ride home ahead of him – so chapeau to you Andy!  We both agreed that today, though pleasant enough, had been somewhat lacking.  However scenic, I don’t think I’d do it again.  I can ride around pretty places completely on my own, and time myself, any time…and there are other events around here that are better.  Harsh maybe, but true.