Hello Sunday.  Hello sportive.  Hello Exmoor Beauty.  Which I was actually quite looking forward to.  It’s not that far away, the forecast was pretty good, and the route had been made more beautiful and less beastly.  Besides, what else would I do on a Sunday? 😉

All of which made for a 5:15am alarm call, aiming for registration at 7:00am, and the start at 8:00am.  Which all went to plan, mostly.  I even slept pretty well the night before, which is unusual.  Surprisingly I was one of the first there, as very few seemed to have felt the need to get there for 6:30am when registration actually opened.  I parked up, and walked over to the school sports hall, noting as I went that it was bl**dy freezing out there!  My registration had gone astray, which does occasionally happen when you get places my way, but the timing guy just set me up all there and then, with a nod from the boss Marcus, and handed me my 1433 envelope, which contained my bike number, two cable ties, and a helmet timing tag.  Then it was back to the car with an hour or so to kill.  I alternated faffing outside with sitting in the warmer car and drinking my coffee.  It really was cold out there, even in the sunshine, a lot of which was due to a fairly brisk and very chilly wind.  Marvellous… 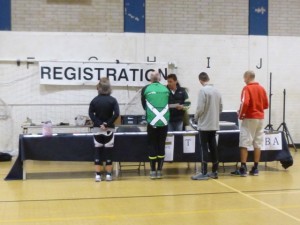 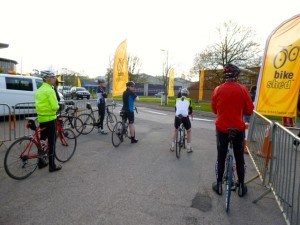 Someone once said that there’s no such thing as bad weather, just the wrong clothing.  Well that pretty much summed up today.  With knobs on.  Given a bright but breezy forecast and the patch of good weather we are currently enjoying, pretty much everyone had presumed it would continue to be pretty much the same, and dressed accordingly.  Including myself.  Yes I could have put on some of the other options I’d bought, but since it was supposed to turn into a sunny nice day, I was worried I’d just be setting myself up for over-heating trouble later.  So I stuck with the plan.  My only concession was to add the winter collar and my overgloves that I’d bought with me to the mix.  This was not one of my better calls….but of course I didn’t know that then did I?

Eventually I stopped hiding in the car and took my bike off to the start pen, half hoping they might let people away early to save us freezing to death.  Sadly not.  The pen slowly filled up, and then bunched up, possibly huddling together for warmth?  As the time passed I got colder and colder and actually shivering.  Lovely.  Eventually Marcus gave us a briefing ably assisted by a man with signs to show us, and we were let go as planned at 8:00am.  I was unusually keen to get going, and to hopefully warm up! 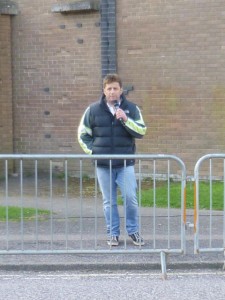 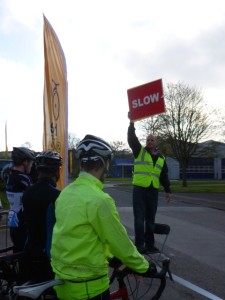 If we’re going with quotes, which it would appear we are, today’s sportive was a game of two halves.  The first half was pretty horrible.  It might not have been if the weather hadn’t deteriorated further, and it had nothing to do with the route or the organisers.  But 3 hours of slogging up hills whilst freezing?  Not good.  I’m sure it wasn’t all up, but it kinda felt like it.  Mind you, I was actually making it up the hills ok, and some of those ups were real stinkers, but still…  And with all that climbing, my average speed was busy being atrocious and making it look like I was going to be out there for considerably longer than the less than 5 hours I’d been hoping for.  On the upside all the quiet country lanes we were using were mostly surrounded by banks and hedges, so that wind wasn’t as much of a problem as it could have been.  On the downside, that meant that all you ever seemed to be looking at was road and hedge, and it all turned into a fairly featureless miserable blur.

It all got a bit head down and zoned out, and I had to remember to look up and look out for signs which, luckily, were large, obvious, and where they needed to be, so I didn’t get lost.  That would definitely not have helped!  Oh, and note to self, if you’re riding alongside a river and it’s flowing the other way to you, you are going uphill, however gradually, and that’s why it feels like hard work!  At least having ridden a bit around here some of it was familiar, including a few of the climbs, but I think it’s fair to say I was not enjoying myself.  I was also feeling a bit guilty that I wasn’t doing my job.  I needed to be taking photos, it’s what I do and it helps me to write about it afterwards.  But I couldn’t feel my fingers, so photos en route were out, and I certainly wasn’t stopping to get colder just to take pictures!  Yep, I was not a very happy bunny.  Really just because I was so cold though which was, sadly, colouring my feelings about everything.  The rest of me was doing the best it could given the circumstances! 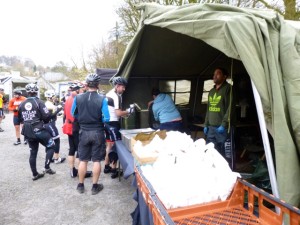 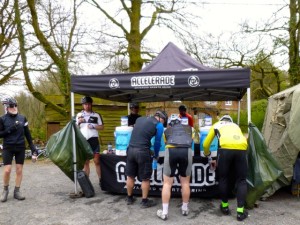 Which brings us to the food stop at Exford, which was advertised as being at 29 miles in, and was actually 34 miles in.  This might not sound like a problem, but when you’re trying to plan eating, and stops, and feel like a break might be a good idea…?  A bit irritating.  Still, a break was indeed good when I finally got there.  And it was made even better by three things.  One – there were no queues for the portable toilets.  Two – they had warm soup.  Warm is good.  So was the soup.  And the nice lady in the food tent asked me if I was her gluten free lady.  To which I replied I wasn’t her gluten free lady but I was a gluten free lady.  So three – she made me a gluten-free ham loaf.  Real edible savoury food.  Practically unheard of and just what I needed 🙂  Thus a little restored, and knowing I was over half way around now, it was time to get going before I got any colder. 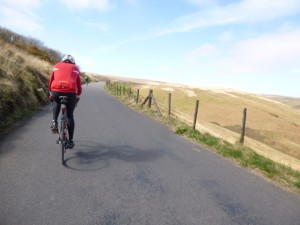 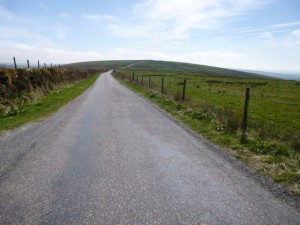 Which brings us to the second half.  Not much later on, as we up headed towards Exmoor proper, the sun finally came out, we went up, and the views came out too.  And the rest of the ride was completely different.  There was more climbing, but it was seemed to be more of the longer, wigglier, shallower, more me variety.  With scenery to look at, including a cairn and everything.  My overgloves and collar went away, the camera came out, and so did my PMA.  Mind you, there wasn’t much hiding from the wind up on’t moor!  Luckily at some point it became mostly behind me.  And here’s where I finally started to have fun.  Faster, flatter, sunnier fun.  In fact the basic trend for a lot of the last half was essentially downhill.  So I hopped from wheel to wheel and I pushed it.   Over the moor, and down into the valley to follow the River Exe, flowing downhill this time!  At some point we joined the return route to Tiverton that the Exmoor Beast takes and I knew I was properly on the home straight.  Fun fun fun – and I was practically warm by now! 🙂 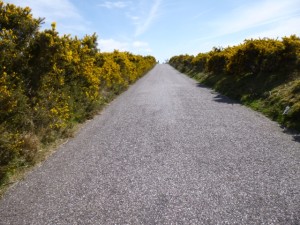 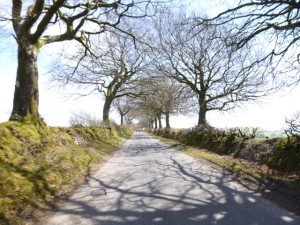 The route turned out, unsurprisingly I guess, to be 68 miles not 64, but since this was familiar territory, it wasn’t as annoying.  I just kept going to get to where I knew I was going.  And then we were back in town and at the school, just like that.  It always seems to come out of nowhere somehow, I guess it’s because it’s on the outskirts of the town?  I rolled under the Finish arch, where Marcus was on the tannoy welcoming everyone in by name, and collected my souvenir tankard.  The Exmoor Beauty was done 🙂 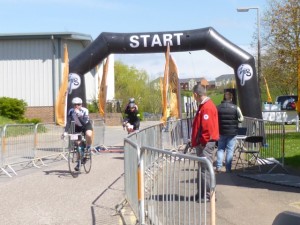 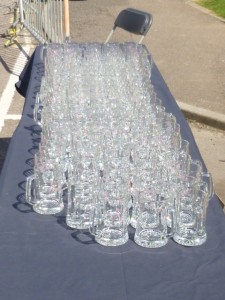 Just the other side of the finish line a familiar face was lurking, Geoff Saxon, and it was nice to have someone to chat to for a change.  He’d also been riding, though much faster than me!   However I was getting chilly again standing still, so I headed off, leant the bike against a wall and went inside to get my time printed out, and grab a fizzy orange as ever before going home.  I had, as hoped, made it round in under 5 hours – both ride time and elapsed –  just!  Officially my time was 4:58 🙂  And when the official results went up a day later, out of 380 riders, I was 167th and 8th woman.  I’m really really pleased with that.  OK, so my average speed may not seem that impressive, but if you consider where I drug it up from…it ain’t bad!

Today was a BIG ride.  Not because it was long – it wasn’t really.  Or because of the climbing – I’ve done hillier rides.  So not a big ride for the obvious reasons.  But….  Today was, by my reckoning, my 100th cycling event.  I know these things are arbitrary, but I’m the one counting,  I am the arbiter, so I make it 100.  So there.  And I’m pretty proud of that.  Besides, any excuse for fizz, right? 😀 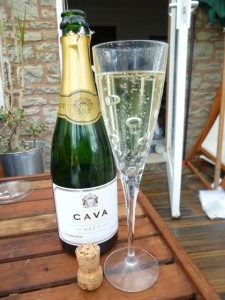