When I woke up the sun was shining.  Within half an hour there was rain, and then hail!  And both in properly quantifiable amounts.  This would be why I had arranged to ride with somebody else – to stop me bailing when the going looked tough!  It cleared up, and dried up…though my weather station was still showing only around 5C out there, so it was far from toasty!

So, what to wear?  Tricky after such a long time.  My layering skills felt rusty, and since it looked so horrible out there and I felt so out of practice, I was worried I was entering over-compensating territory and about to wear too much!  Are you ready for my Michelin man impression?  Ok then, here goes, and in order of donning…  Sports bra, new l/s Rapha base layer, Gore bib long tights, new Rapha winter socks, overshoes, s/s Cyclosport jersey, Gore winter jacket and Planet X winter gloves, with my old Rapha winter collar in the saddle bag just in case.  The only thing I forgot, which I was to rue later, was a Buff over my head to keep my head and more particularly my ears warm.

All dressed up, with somewhere to go…and as I rode up to the Square, a little early, the rain started.  Man am I ever gifted!  I sheltered under the cover of the Town Council Farmers’ Market Stall  until Martyn arrived.  Even with all our entreaties to friends and the ACG, it appeared that we were the only two braving the elements…everyone else presumably being somewhat more sane than us!  Still, just in case we waited until 9:00am before heading off – we’re good like that.  Somewhere on the way out towards Cheddar we passed another well-wrapped cyclist going the other way, who looked suspiciously like Grant, but since he never comes cycling with us, I presumed I was mistaken, and we carried on our merry way.

Off we went towards Wedmore.  This was not a training ride, this was a coffee run ride and nowt more.  Ten days without riding the bike and I wasn’t expecting great things, which is just as well because that way I wasn’t disappointed!  It felt like hard work.  OK, so the wind and rain and cold probably weren’t helping.  And I always forget how strong Martyn is, and that he’ll always match whatever speed you’re doing and then add some, and then I try and keep up, and so it goes on…  But still – hard work!  We took the direct route to Sweets, there being no other option in my mind.  The little lump of Mudgeley Hill from Wedmore didn’t actually feel too bad, which was vaguely positive, and the descent the other side was just as lovely as ever, even in the wet, which was mostly just on the road now rather than actually falling upon it, making life far more pleasant.

There were a couple of other local cyclists already at Sweets when we arrived, who we didn’t know, but who we knew a little better soon enough.  Hello Ben and Helen!  After being there a little while who should walk in but Grant?  Well, b*gger me, it was him after all!  Just as well we’d advertised where we were going and stuck to the plan then.  And he wasn’t the only one.  Mr extremely fast Tor 2000 Mike was the only one of his usual posse to make it out this morning, so had headed out a bit early to come meet us for coffee too, which was lovely.  A 100% increase in numbers!  Looks like we two went forth and multiplied!  Positively sociable, no? :). 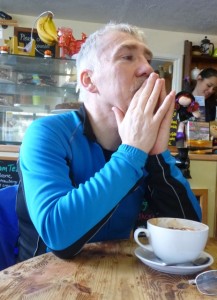 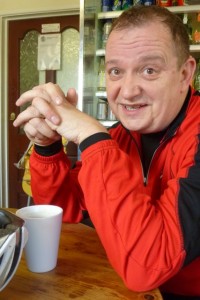 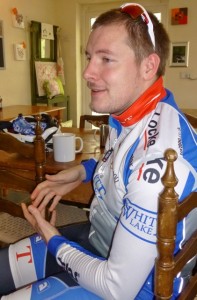 We sat, we talked.  I hugged my coffee cup, it being warmer than me.  Since eating is apparently out of the question these days, I added some sugar to it which totally goes against the grain, but is probably better than nothing.  That’s another one of my problems at the moment, and a fairly major one at that – my inability to fuel properly.  Yesterday’s safe rice cake and ham lunch?  Last night’s safe pie?  This morning’s safe cereal?  What do they all have in common?  That they went straight through me!  Right now it doesn’t seem to matter what I eat, that’s what happens, so it’s probably a miracle if I manage to derive any nutritional benefit out of anything! :(.  Probably another reason today felt like a hard work…moan, winge, excuses, excuses, etc.  I know, I know, Rule 5! 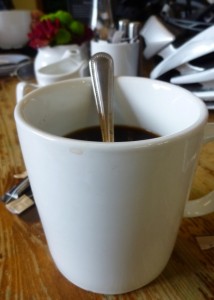 The weather had been fairly pleasant as we passed the time inside but, as I jested was likely, by the time I set off on the trek to the outdoor toilets, it was starting to rain again.  Making it rain is my superpower remember? ;). 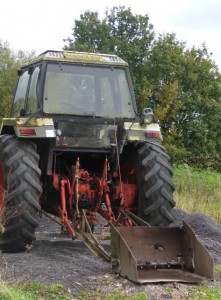 We dillied and dallied and faffed under the outside cover for long enough for it to improve from truly hideous to barely tolerably horrible.  The winter collar came out from the saddle bag sharpish, every zip went up and stayed up, and even then I got ice-cream head as we headed back across the Levels.  Which would be when I rued the lack of Buff…next time I’ll know better!  Still, trying to keep up with the boys was fairly warming.  Mike makes it look so depressingly easy – clearly slumming it – and Martyn always gives as good as he gets.  I did try and keep up…luckily I managed to slip to the back and chat to Grant for a bit before it became (I hope) too obvious as to how crap I was!

It’s tricky really.  If I’d been on my own I’d have taken it easier, but then I might also not have gone out at all.  In such illustrious company I probably pushed too hard so as not to make too big a fool of myself, which may not have been wise from a rest and recovery point of view.  If you look at the stats, even though it was flat, we were doing pretty well by my standards, so I should possibly be a little less hard on myself? 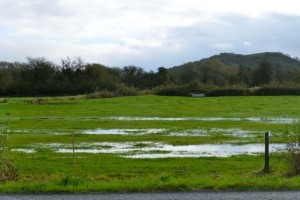 Having negotiated a range of variously filthy and wet country lanes we were fair flying down the Wedmore road to Cheddar at a more than acceptable speed when Grant got a rear wheel puncture.  Darn – I was enjoying that!  To be fair, so was he…but it turns out a nasty little flint had stopped play.  Still, it had stopped raining, there was a little sun, and we had a quiet side road to lurk in whilst he performed an impressively efficient tube change.  I believe I’ve mentioned before that such things are a spectator sport, right?  Watch us watching!  I’d have helped, but clearly my job is to capture the moment in official press photographer stylee.  Well, it’s that or break a fingernail right? ;). 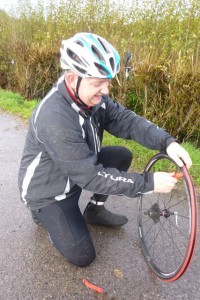 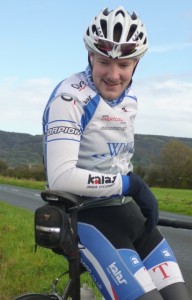 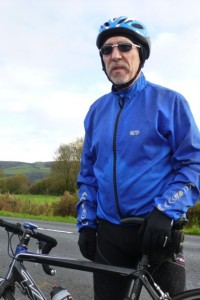 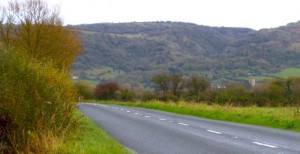 Grant peeled off homewards when we reached Cheddar, and we three headed back towards Axbridge.  I was flagging a bit up the main road, and gave up trying to keep up, but I was still happy to shoot past the guys, who were chivalrously taking it easy and waiting for me at the top, to head down the bypass for home.  A sort of slingshot affair.  Not at quite my usual pace to be sure, but fast enough to get me home just before that last gasp burst of energy ran out.  There wasn’t any more where that came from that’s for sure!  We rocked up in the Square, with my exertion in cold air induced cough already making its presence known, and I’m happy to admit I was glad to be home.  The others still had more miles to do, Martyn back to East Brent, and Mike back to Somerton, but I wasn’t even remotely jealous! *grin*.  Best to know when you’re beaten right?  At least I wasn’t cold – all my lovely new kit had kept me as warm and toasty as it was supposed too – even my feet, which I didn’t realise were wet until I got home I took my socks off.  Result!  Money well spent methinks :).

Thanks for the ride guys :).  OK, it’s a little depressing to be this far off my game, but better out than in, and it was really nice to have company to keep me going.  It was also lovely to unexpectedly catch up with Grant and Mike (metaphorically speaking, since I’d never catch Mike unless he let me!) both of whom I haven’t seen for ages.  Most impressively of all, and I’m not sure how it happened, but what was meant to be a quick rinse turned into a proper wash and polish, so the Cinelli is now as clean as it gets.  It’s really winter bike time, but since the Cube is currently out of action due to bottom bracket issues, me and my new baby get to play together a while longer :).

I don’t know when the next ride will be, and I don’t know how I’m going to feel as a result of today’s ride, but it’s a start right?