Two rides behind me…one big one ahead!

So, with no further ado…  Last Thursday Mim and I went to Sweets for coffee and some major league venting.  Not a long ride but an essential one.  Cycling therapy comes in many forms.

On Sunday there was an ACG ride that I could actually make which, with my sportive obsession, is a rare and unusual thing during the season.  Not a bad turnout either.  We were 8…well we weren’t, we were 7, as Jon managed to have a gear mechanical that Paul couldn’t fix even before the Brent Knoll contingent made it to Axbridge, and had to bail.   So…roll call time.  Me, Ian (long time no see, welcome back!), Robin, the triumvirate of fast people – Paul, Trevor & James (*gulp*) and newbie Geoff.  Yep, that looks like 7 to me.

Being as even if we hadn’t asked, Paul would have been on the front showing us how it’s done, it was decided that the village elder might at least get to decide where we were going.  He did start to explain to us, but after a while I kinda lost track, glazed over, and resorted to occasional nodding.  I may not have been the only one ;).  Essentially we were going to ride for a bit, have coffee at Fenny Castle, and ride back again.  Or something like that.

So off we went.  With various exhortations as to how we should remember that G is for group, and stay together.  Etc.  As you can see, it ended up not being quite what was planned.  Neither route, nor coffee stop.  Paul delighted on trying to find roads we hadn’t been down before, especially around Shapwick.  He even succeeded a couple of times.  Then again, it’s nice to abdicate responsibility and just let someone else lead the way, so I wasn’t bothered…I was too busy trying to keep up! 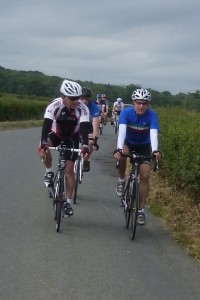 Somewhere along the way we came upon a damsel in distress…having had the chain on her bike come up and get stuck between the rear cassette and the wheel.  Talk about chefs and broth.  Many hands making seriously heavy work.  Rarely have I seen anything as funny as a group of mamils trying, unsucessfully, one by one, to slay the dragon and winning the fair princess.  And that’s not the really funny bit.  That’s coming up.  So various abortive attempts were made to dislodge the chain.  Finally Paul took over and set about trying to get the back wheel off unsuccessfully instead.  All this was being done by those who were somewhat more concerned about getting chain oil on their hands and transferring it to white handlebar tape and saddles, than actually getting the job done, thus using straw, leaves, and various tools (we are evolved after all) to try and prevent this from happening.  Hilarious!  Want to know who actually fixed it?  Me :).  Because I don’t give a monkey’s about getting my hands dirty…so I grabbed the chain, gave it a good yank as required, and voila, job done.  Paul undid the undoing he’d been doing to try and get the wheel off, and the poor, somewhat bemused lass, was on her way again, probably slightly wondering what had hit her.  I wiped my hands on my shorts (I’m a classy bird), and off we all went again.  I may have been sniggering a little…;) *grin*. 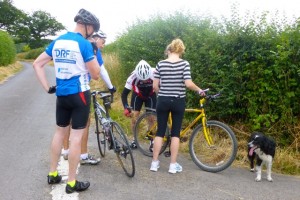 I don’t know what happened to coffee stops after an hour…I think Paul, due to his ability to cycle endlessly without rest, underestimated things (or us!) a bit.  He was still quite keen to head for our original destination but I was well past needing my coffee, and it was a while since we’d been to the yurt café.  Yes, I can’t remember what it’s called, but it’s on that funny road by the peat workings after Shapwick and just before you get to Glastonbury. 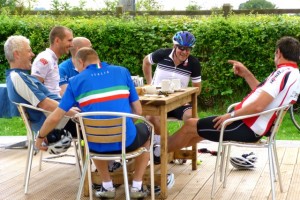 Actually I like it there.  Even if the arrival of a large number of cyclists (compared to her usual two by two visitors of which there were four) did give the lady behind the counter a bit of a heart attack!  She coped admirably, all things considered.  It’s spacious, outside, in the countryside, and very quiet and peaceful.  Apart from the sound of usual cyclists’ techy gear discussions and one-upmanship ;).  Geoff managed to hold his own both on the ride, and at coffee – chapeau – he’s going to fit in just fine! ;).  We also discussed how ubiquitous smart phones are and whether or not that’s a good thing…while I checked my email, caught up on twitter, and texted various people *grin*.  Oops ;).  Well in my defence, I’m clueless about most of what was being talked about…! 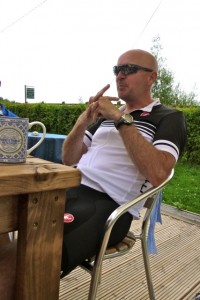 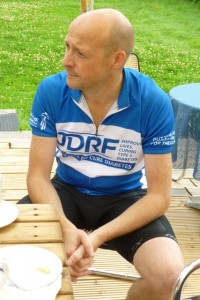 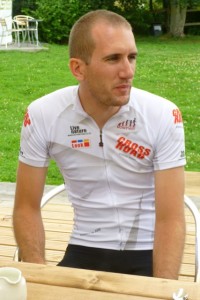 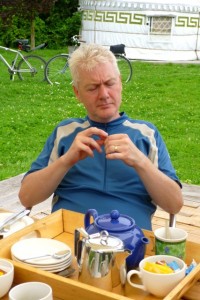 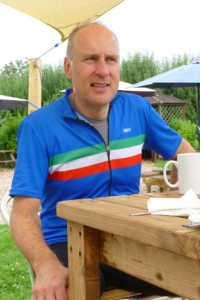 The coffee was ok, the tea came in a large pot, the cakes looked nice, and generous, and holey crap, have you seen Trevor’s cream tea??  Wow!  I couldn’t eat that on so many levels! 😉 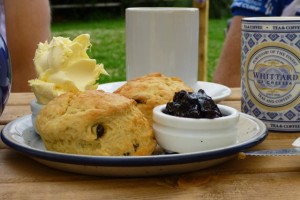 Right.  Already later than planned, and with places to be and brownie points not to be wasted, it was time to head for home in a more direct fashion.  Having managed to stay together as 7 on the way out, the same could not be said for the way back.  After a while Geoff and Ian dropped back a bit togehter, Paul and Trevor and Rob overtook me after I tried my best on the last fast bit, and dropped me, and so James and I sort of oscillated around in the middle somewhere.  I’d love to have had Paul around to chase down the bypass to try and get my segment PB, but I stopped at the parting of the ways to say farewell to Robin, Geoff and Ian, and never caught the others back up again.  Darn…another time, right? 🙂  I tried…but no joy, and after a little while spent catching my breath, and pouring sweat, in the Square, I headed for home on my own.  Nice route, nice ride – thanks guys! :).