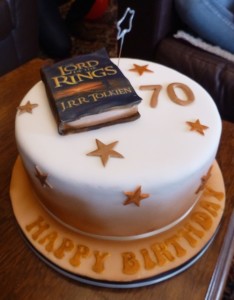 Me oh my, I am such a long way behind. But there’s been so much going on! Riding, working, Dad’s birthday, life…what can I say?

A lot of the two weeks prior to this sportive was spent trying to get my knee better.  Resting more, riding less.  Though probably not quite enough of one and too much of the other.  But hey, I was trying…! 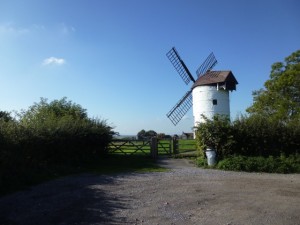 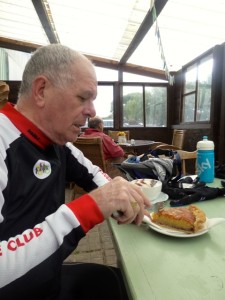 Since the Welsh Raider, when things went a little pear shaped, I’d done a flat easy run with Alan, a flat short loop on my own, another easy run with the ever-patient Alan, and a nice seaside loop with, unsurprisingly, Alan again.  And slowly things had been getting better.  Riding was not pain free but it was improving, and the time required to recover off the bike had been coming down.

All of which means it was time for another sportive.  The Evans Ride It Wiltshire Downs, to be precise.  It’s fairly local, which means a shorter drive and more time in bed.  And coming as it did, the day after the clocks went back, that means another hour in bed, and daylight to drive in.  Very handy!  Even better, the forecast was good, and that drive took place in autumn sunshine, something you wouldn’t have predicted considering that it spent all Saturday p*ssing it down…! 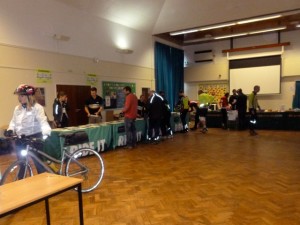 HQ was at Wiltshire College, Lacock, at the end of a long, muddy, leaf covered drive, which would turn out to be pretty typical of all the roads for the day.  It may have been dry overhead, but not under wheel!  I parked up in a muddy gravel carpark a little way from registration and decided that I’d get sorted and then register rather than to-ing and fro-ing.  It being October, even with the sun shining, it was pretty darned cold, somewhere around 6°C, so it was just a case of putting on all the layers I’d brought with me, loading up the bike and my pockets, and heading off.  There were toilets in a changing room block opposite where the gentlemen were queuing and where I didn’t have to, and as it turns out, there were also more inside by registration.  I registered, and the lady stuck my timing sticker on the right hand side of my helmet which was unusual, it’s usually t’other side.  No bike number, so presumably no photography either, a map, and a High5 race day pack, and I was done.  Since I had no intention of returning to the car to stash anything, I plundered the pack for the useful and discarded the rest. 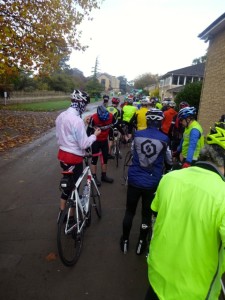 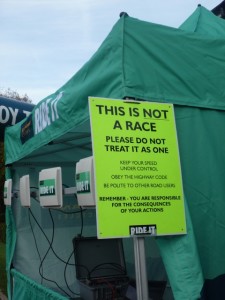 Back outside, and the queue for the start was stretching a long way back, which was a bit disheartening, with the thought of standing around in the cold for ages not appealing.  Still, it turned out not to be too bad in the sunshine, and the other riders around were chatty and sociable and as riders were being let away in fairly big groups, it wasn’t long until we were the next group, with me right at the front of it.  No pressure then!  After the usual rider briefing, a demo of the black on pink arrows, again novel, and a reminder that this was all supposed to be fun, we were off on our way.

Wiltshire College doesn’t half like its speed bumps!  I’m not sure when we stopped being on the estate, presumably when they finally ended!  Somewhat oddly, I seemed to have left my group pretty much behind me, so it felt like it was just me heading out into the Wiltshire countryside.  My camera had somehow run out of batteries, so there’s not a lot of photographic evidence of my day sadly…which is a shame because it was absolutely beautiful out there.  Glorious in fact.  I’ve cycled around this area before, most notably on the White Horse Challenge, but a lot of this route was completely unfamiliar to me, and I’ve never seen the Downs stretched out around me like that before.  Stunning 🙂 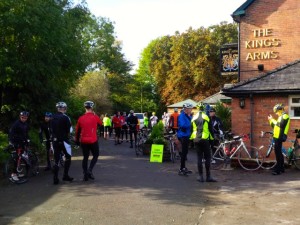 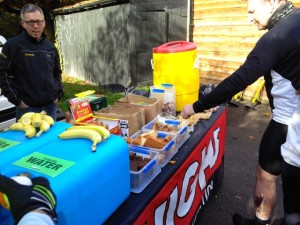 Having got my layers spot on, after the initial chill had worn off and I’d warmed up, so about an hour then, I was pretty happy out there.  There were a few ups, but nothing too terrible, and most of it seemed to be being fairly flat or rolling.  So, on to mental meanderings and route decisions to mull over.  There were a lot of options, and route splits came one after the other – no front loading this time.  Would it be the Fun route at 15 miles?  Nah, don’t be daft.  Ok then, how about the Short at 34 miles, the Medium at 63 miles, or the Long at 80 miles?  Hm…  No rush to decide though.  The first food stop came at 28 miles in, in a pub car park, where the two outdoor toilets were proving woefully inadequate for the number of people wanting to use them.  I duly queued, and then after grabbing some jelly beans, and taking the odd photo with my phone, headed off again.  The next route split came shortly afterwards, but even though I reckon there were at least three things wrong with me, because I’m lucky like that, I still reckoned the Short route would be too short. 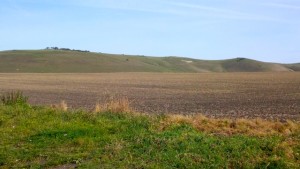 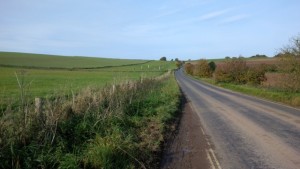 I did decide however that, although the longest route appealed, and let’s face it, it was a beautiful day to be out there, it would be unwise to push it. I reckoned I could manage the 60 without making things too much worse, whereas with the 80, with the bigger climbs in the extra miles, I might set my knee’s recovery back quite a way, which seemed like a daft idea.  So when the next split came along shortly afterwards, I took it.  Which meant that I was half done already and on the homewards stretch.  A stretch that took me through more beautiful countryside but back on to more familiar turf.  Not that I’m complaining, I love cycling through Avebury 🙂  The lack of novelty did make it feel slightly like harder work though somehow, less to distract the brain from the effort being put in?  I guess I was also getting tireder, I’m fairly sure I hadn’t eaten enough, (nothing new there then), and being ill does have a habit of taking it out of you even if you are doing a very good job of ignoring that 😉  Still the scenery continued to keep my spirits up far enough.  Multi-coloured autumn leaves, close cropped fields still golden in the sunshine, blue skies stretching for miles…  Sorry, since I’m short on photos I thought I’d try poetic words instead 😉 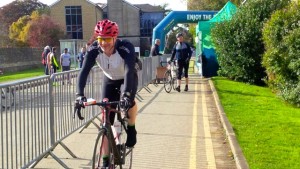 Towards the end there was a long draggy staged up that went on for a couple of miles.  Hardish work but my kind of climb, and man, the descent afterwards was way more than worth it!  OK, so there were “Caution” signs and there were other riders who were gingerly braking their way down, but I could see all the way down, it wasn’t very bendy, and there wasn’t any traffic coming so….yep, I was the loon hurtling down on the right with a massive grin on my face 😉  A couple of miles after that and I was back negotiating speed bumps, and then crossing the finish line, where I was given another High5 taster pack.  Job done 🙂  There were lots of happy riders milling around in the sunshine and eating the hot food on sale.  I took a break on a step with a can of fizzy lemon, before making my way back to the car. 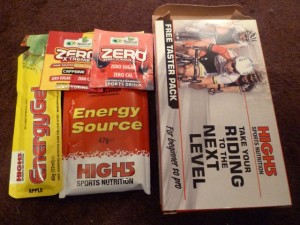 I may not have done the event justice, but I’d definitely do it again.  In fact I actively want to.  The route is lovely, the scenery is stunning, and it’s not too challenging – so it was perfect for this time of year.  Maybe next year I’ll get to do the long route 🙂 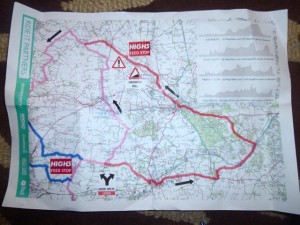 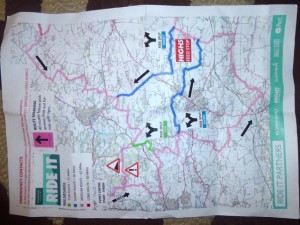