Well it is now that I’ve got a decent ride under my belt 🙂  It is officially allowed to be Christmas.  I’ve done as much damage limitation as I can.  Let the games begin!

Anyway I haven’t got time for a finely crafted entry – places to be, people to see, festive frolicking to be done – so please to be excusing me.  Bearing that in mind, I shall continue…

Social media seems to suit cyclists particularly well, and there was a general consensus (ie I’m not sure who’s idea it was initially) that meeting at Sweets today would be a nice idea.  Someone pointed out that Sweets wasn’t actually open, so someone else got all proactive, and presumably as a result, Sweets decided to open today between 10-12pm just for local cyclists.  How cool is that?!

Now Sweets isn’t actually that far away, so I had to get a bit creative with the route and make it worth my while.  Not just my while – as having put out a call to legs, DM decided to join me.  DM aka Boots, if you’re a reader of GB’s blog.  Being as how I’m keen on keeping my hill skills brushed up, such as they are, and considering that he’s a mountain goat, who laughs in the face of gradient, we started with Shipham Hill.  Well, it’s as good a way to warm up as any, and it was a bit nippy as we set off.  DM has not been well and was suffering a bit today, so we weren’t pushing it.  This makes 15:20 to the top pretty respectable, if you’re interested in these things, which clearly I am.  From there it was Churchill, Sandford, Banwell, Christon, Loxton, Mark and Sweets.  Join the dots if you will.

As we approached Sweets, down the final straight of Totney Drove, the Tor 2000 group went past us with, as DM put it, a whoosh of testosterone ;).  I did try and keep up but hey, some things are just not meant to be.  I may not have enough testosterone…  When we arrived Sweets was heaving.  Cyclists from hither and thither – Somerset Cycling, Tor 2000, the ACG, and many others.  Luckily there was quite a lot of flux so service was fast enough, the coffee was good, and we only ended up sitting outside by accident.  It was fab to finally meet up with some of the folk I only usually “see” on Facebook.   I won’t name you all because if I did I’d miss someone out and there’d be hurt feelings and everything, and it’s Christmas and we can’t have that *grin*. 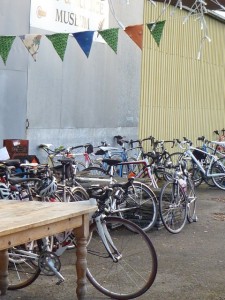 quick, bring the van around...! 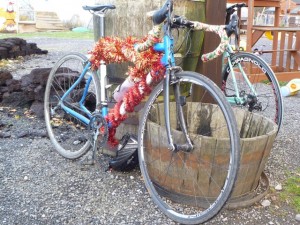 a bike with tinsellitis (*groan*) 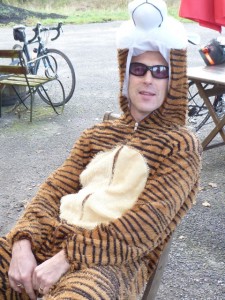 Someone else getting into the spirit of things *grrrr*. 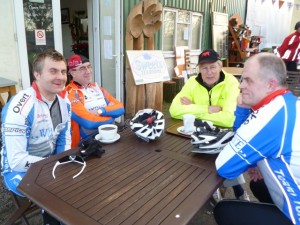 Coffee drunk, nice chatting done…, but the chill was setting in so it was time to go.  We came home the direct route – straight up Mudgeley Hill, down the main road, in fact as close to as the crow flies as possible.  At speed to try and get warm again!

In case you were wondering, I was festive too :). 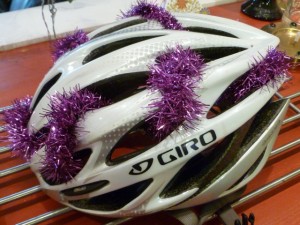