Well, knock me down with a feather, I appear to have been out riding the bike again!  It’s my day off, it’s half term, the mob were variously and happily occupied, and the forecast wasn’t too bad.  As is often the case, the weather which was predicted did not match that which actually materialised, but everything else remained true, and I wasn’t going to let a little drizzle put me off.  Besides, there are plans afoot for an ACG ride on Sunday and I wanted to see which roads were flooded, or not, in best girl scout “be prepared” fashion, so as to plan a route accordingly. 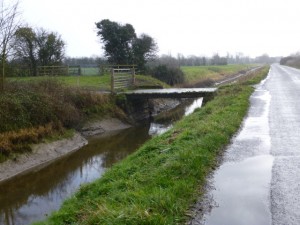 So I did my usual kind of loop, with the odd extra bit thrown in.  It’s been so long since I’ve had the wonderful head space that I only get on the bike, that while I was busy clearing out the mental mothballs I missed the odd turning.  So it didn’t quite go to plan, but it didn’t really matter.  I still got to where I needed to be, and the roads weren’t flooded, apart from one short patch on Max Mill Lane which wasn’t a problem.  They were however covered in crap, and also washed away in places, so had to be negotiated with care.  Since I wasn’t in any great rush, and just wanted to be out there, I was happy to ride as circumstances dictated.  Hey, always good to have something to blame the average speed on, right? ;).

In brief aside, I’m having a “now” phase.  As in being happy in the now.  No point crying over the milk spilt yesterday, or inviting tomorrow’s troubles to arrive early.  I’m not very good at yoga, or meditation, or any such philosophies really.  But if I was going to, it might possibly be the whole mindfulness thing.  By focusing on the now, being grateful for what that now is, I seem to be spending more time at the happy and positive end of my spectrum – and that has to be a good thing :).

So in my now I was on my bike, on quiet roads, feeling pretty good, riding fairly well, and damp but not cold.  I was outside in a world full of flying things – swans, herons, a kingfisher, and even a wokka-wokka (aka a Chinook) flying low over the Levels, presumably bringing more of the army to submerged Somerset.

And I still wasn’t in pain.  It’s hard to explain how an absence of something feels.  Even when it wasn’t hurting, I knew where it was.  Now it’s not hurting, and it’s not there. Or at least I’m fairly sure it’s not.  *fingers crossed*.  I can’t explain how I feel better, but I do, and it’s not just the absence thing, it’s more systemic than that.  Being ill and in ever-increasing pain and on stronger and stronger meds for so long must have taken a lot out of me.  And now I get to get me back?  It’s a whole new, strange, world…  Ok, ok, sorry, got sidetracked again, enough already, back to the cycling :D.

As routes go, it wasn’t long, or hilly, or fast, but it went pretty well really.  My times up the hills I did do were not, somewhat amazingly, my slowest ever.  My average speed was also up on Sunday, which is encouraging.  But in that even after a rest day, yesterday’s wattbike session had to be aborted after 45 minutes when I ran out of energy, it seemed like a good idea to opt for some restorative calorie intake after I’d showered and changed.  So there was a happy me because I’d ridden well and a happy three because we had fabulous hot chocolates with the works.  Result *grin*. 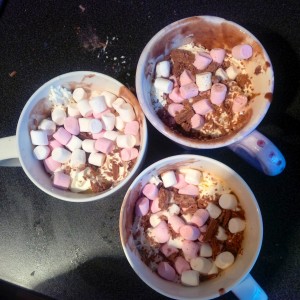