It’s all about just riding the bike.  After two weeks away from it, I’m just happy to be back riding the bike.  Considering how I’m feeling at the moment, I’m also grateful to be up to riding it at all, as after the ACG ride on Sunday I spent the rest of the afternoon unable to get off the sofa, and it’s only been getting better slowly.  So it’s not about training, or climbing, or even the two hour rule.  Today it was about getting some endorphins going around, and getting out of the house, properly distracted from the whole wallowing self-pity fest that this could easily turn into.  Enough already!  So once the mob were safely ensconced at the KOW Activity Club, I went for a ride with Mim.  Time to get a few miles in in company and catch up.  Shooting the breeze…because it was windy, but just a bit muggy and nondescript weatherwise otherwise.

This is what we did.  Nowt special – some flat, some little lumps.  Once again the legs were feeling pretty good, and the engine was doing its best.  On those fronts I didn’t find Brent Knoll much of a problem, and we even chatted up Mudgley Hill, albeit with breaks to breathe.  But I was painfully reminded that that kind of thing is not good for my insides, which doesn’t bode well for how I may be made to feel at the Sodbury Sportive on Sunday.  Still, things may well have settled down a bit by then?  We can but hope: *fingers crossed*, magpies saluted, entreaties to deities of choice made…  I still felt better on the bike than I have been feeling off it, so the ride achieved that for me at least.  It’s a start :).

Unsurprisingly, however well I thought I was doing, I didn’t triumph in the Strava stakes (tho I still did pretty well by my standards) but that’s not what today was about, now is it?  It was about the company.  On learning a little more of my predicament, which I reluctantly had to explain a bit just in case my riding went properly pear-shaped, my aforementioned company told me off, quite gently to be fair, for not letting people in, and pointed out to me that my friends can’t help me if I don’t let them, that I can ask for help, and that I don’t have to be strong all the time.  Well, I wasn’t expecting that… !  Aw…shucks.  Not that it’ll make any difference to how I do things, we all roll how we roll, but it was nice to hear :).

I didn’t take photos en route today, so here’s something pink and girly for you, to go with the temporarily soft fluffy theme… 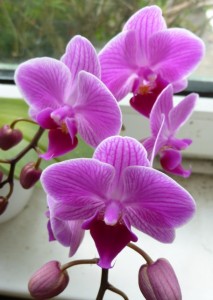 Look, a house plant I haven’t managed to kill yet!

Then I put a long dress on, stuffed these on underneath where no-one could see them, and went to work. 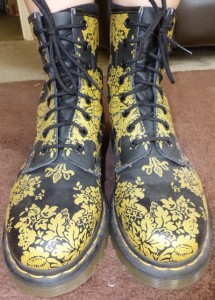 …”she walks softly but she carries a big gun“…

2 thoughts on “Together alone”